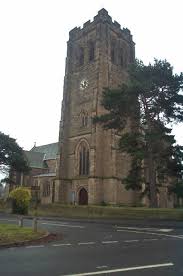 A new geographical area for the choir even though Worksop lies only 14 miles north of Mansfield. Our Concert Manager, Lynden Lowe has done exactly as he intended by extending the choir’s reach into new venues and he reports that the officials of the church are very pleased to stage a concert in their lovely church.

The church is located on Newcastle Avenue in the centre of the town and 2012 saw St Anne’s Church celebrate its 100th Anniversary. It was built as a gift of Sir John Robinson, then of Worksop Manor, to the parish and was consecrated on 24th November 1912 by the then Bishop of Southwell, Sir Edwyn Hoskins.

It is built mainly of stone quarried at Darley Dale. Its foundations were laid in the year of the Coronation of King George and Queen Mary, carvings of whose heads adorn the north arcade of the nave of the building.  Concerted efforts have been made to preserve the fabric of the building over the years and in 2011 following a significant number of lead thefts to the north and south aisle roofs, permission was obtained to replace the remaining lead with terne coated stainless steel. The longevity of the building features strongly in the mind of the church officials and parishioners