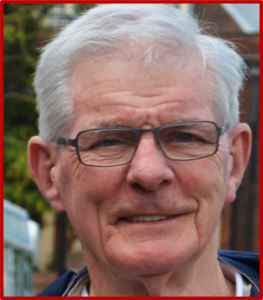 Today, after a delay of some seven weeks, we attended the funeral of one of the most kind-hearted and unassuming gentlemen of the choir Mr. Geoff Shooter. Although the congregation was limited to 30, many more arrived to pay their respects and I am sure Geoff would have sincerely appreciated the evident love and sincerity.

Geoff celebrated his 80th birthday last November. He was born in Kirkby in Ashfield to a fair-sized family of 4 brothers and sisters. The family moved to Rainworth and subsequently to Mansfield Woodhouse. Upon meeting Margaret, it wasn’t long before they were making plans to marry, and this was done with some aplomb. Geoff and Margaret eloped to get married in Gretna Green in July 1964 when she was just 18 years old, and Geoff was 23. No doubt both sets of parents were worried, but they had no need as their successful and loving marriage lasted 56 years. This exciting wedding was featured on the front page of the Mansfield CHAD.

Geoff worked in the mining industry, primarily at Rufford pit and settling in Mansfield Woodhouse and subsequently in 1974 into their home on Leeming Lane North the couple were blessed with two children: John and Sarah. John, through the help and dedication of his parents won a place at Cambridge to read music and has followed an illustrious career as an organist and teacher working frequently in the far east, at present in Hong Kong. Sarah, when aged 3, was diagnosed with Rett’s disease and has since suffered physical and mental disability. Geoff and Margaret dedicated such love and care for Sarah who , in more recent years, has led a happy and comfortable life in the Oaklands home in Warsop.

Geoff joined the choir in 1994. He thoroughly enjoyed his singing, the camaraderie of the members, forming lasting friendships with many and was instrumental in directly encouraging new members. In the early 2000’s the choir nearly closed, and it was Geoff who was willing to step forward, take responsibility and to serve as Choir Chairman from 2003 to 2009. It is without doubt that his determination and leadership gave new life to the choir. Geoff and Margaret have been very loyal supporters and enthusiasts in the choir; always present at concerts and Supporters’ Group events until ill health made that difficult.

Today, Geoff’s son John, could not physically attend his father’s funeral but joined via a video link from Hong Kong. However, John’s partner Karen, read out his moving testimonial which captured Geoff’s spirit, love for his family, and celebrated a most successful life. The congregation were happy to hear Margret’s choice of song to illustrate how Geoff lived and how he impacted on those around him. “Bring Me Sunshine” by Morecambe and Wise. Could not be bettered!

5 thoughts on “Goodbye to our Gentle Giant; Geoff Shooter”