It has been a while since the lovely concert with Sonara for Hetty’s charity on 23rd April 2022 at Queen Elizabeth’s Academy. However, after much co ordinating of diaries and arranging a convenient venue a cheque for £1,500 was presented on 21st June. The picture shows, from left to right, Ian Grice, MD; David Marriott, President; Tracey Crosby form Hetty’s and John Wakeland, Chairman at the all important point of handover. 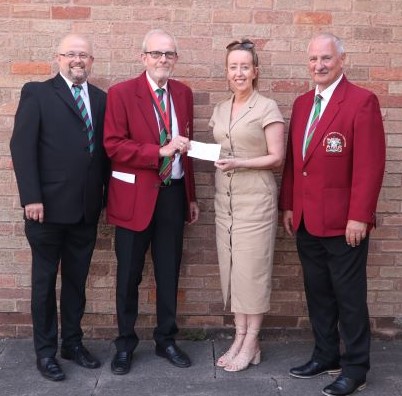 We were pleased to be able to support our President’s charity and we should mention the work of several groups of people that worked hard to make the event a success.

Sonara for joining us and particularly Helen Beresford for standing in as the choir’s conductor at the 11th hour.
Ian and Helen for devising and directing a wonderful programme of entertaining songs.
Margaret Ball our choir accompanist for performing the accompaniment not only for our choir but also for Sonara, again an 11th hour rescue as Sonara’s pianist became unavailable.
Mr. Tony Delahunty the owner and MD of Radio Mansfield for his eloquent presenation as the cocnert “Master of Ceremonies”.
Our choir Supporters’ Group for manning the entry door, taking tickets, selling raffle tickets and serving refreshments.
The Hetty’s team for their fabulous cakes and raffle prizes.
Lynden Lowe our Concert Manager for managing everything o bring the concert idea into fruition.
David Marriott for his Presidential stance in bringing Hetty’s to our attention and for advocating their essential work in the community looking after families who support their family members suffering the effects of alcohol and drug abuse.