Lynden is a seasoned and very experienced bass section chorister. He is currently the Concert Manager for our choir having previously held this role for St. Edmundsbury MVC. He has an incisive wit and a great ability to connect with people. He is married to Jill and they have two sons Tim, who lives on a narrow boat in Norfolk and Nick who lives in West Bridgford. Here is his story.

I was born in Kirkby-in-Ashfield the younger of identical twins. We started singing aged 7 in St Wilfrid’s Church Choir and in 1968 aged 18 I went to sing at All Saints Church Stanton Hill. It was here that I met Jill in the vestry as we both sang in the choir and, in due course, we were married in 1974. 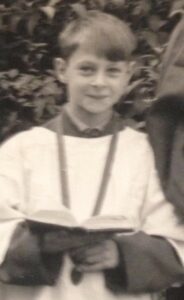 After the first All Saints practice, I was asked by a chap called Vic Bacon “Are you coming to Mansfield with me?” he meant, of course, Mansfield and District Male Voice Choir. My first rehearsal was at Bridge Street Methodist Church in Mansfield and I think the next person in age to me was about 20 years older. I looked around and thought I would not be coming back here! I was introduced to Arthur Smith the conductor and Vic told me to sit between him and his brother Matt. I remember the very first piece I sang was called “The Herald”, we turned to the back page and started, the words were “Ye Dead My Master Comes” and there was I among a lot of what I thought were old people. Little did I know that I would very soon have 45 new pals; that is how it is with Male Voice Choirs.I remember one particular concert at the Albert Hall in Nottingham with Mr. Harry Mortimer conducting the brass band and male voice choirs. I also remember entering several competitions in which we did not always come first but in which we won on many occasions.

My working life started at 15 with J. Searsons and at 16 I began a 4-year bound apprenticeship as a plumber. I left the choir and my plumbing career in January 1976 to join the Royal Air Force.as an Aircraft Fitter Electrical and during my career worked on many different aircraft mainly in England and Wales. 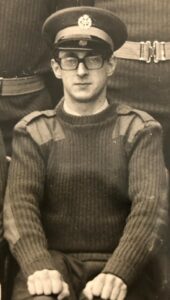 In 1994, having left the RAF, Jill, and I settled in Suffolk  and I went to work as building service engineer doing mechanical/electrical work in mainly commercial industrial buildings around East Anglia, from Southend to Nottinghamshire.  It was here that I joined The St Edmundsbury Male Voice Choir to resume my singing. Eventually I became the choir concert secretary and I re contacted  Walter Pitchford at Mansfield which led to the choirs exchanging concerts; this relationship continues today. In December 2014 I moved back to the Mansfield area and rejoined the choir. It felt good to be back!

Like all new people in a choir the hardest thing is putting names to faces. The camaraderie of travelling together to another town to sing with another choir or attend a social function with your fellow choir members and friends is a big plus for me and I look forward to rehearsals. I have also sung with church choirs and mixed voice choirs, but there is just something special about a male voice choir that you can’t quite put your finger on.

I enjoy all types of music except RAP and as we have incorporated some modern music into our repertoire, we may attract some younger members. My advice for new members would be to try it for 3 months, do not be afraid to ask for help if it appears difficult, we have ALL been there.

Away from the choir I am chairman of our local U3A, and this keeps me busy along with the many subgroups I belong to, within the U3A. Jill and I enjoy spending time with family and friends from my RAF days who are spread far and wide.