Mario sings in our 2nd Tenor section and is the section leader. Mario is a polymath, he is very capable in  many things as you will see in his lists of interests. His family history is one that is imbued with music; his dad was a local choir conductor.

Personal background, birth, family, job etc. Half Greek, half English, I was born in Warsop in 1953. Mum and Dad both worked for the Coal Board as it was then. Dad was Area Statistician and Mum was a Tracer in the days when that job existed. I became a teacher in 1974, working full time until 2007 when I resigned full time and was a supply teacher until 2014

How were you informed about the choir? In 2003 I received a letter from choir secretary Jean Hales, saying Meryl Chambers had requested me to ‘have a go’, as she knew me from St John’s Church in Mansfield. I turned up at the appointed hour and was soon singing from the same hymn sheet – actually it was Chorus of the Hebrew Slaves by Verdi.

Why did you go? I honestly cannot answer that. I have a feeling it was for my Dad. He had been conductor of the Welbeck Colliery MVC and Forest Singers for many years. His death in 1977 left memories of choir concerts and friendly faces, pints of Mansfield bitter and Dad’s humour when compèring/conducting.

How did you settle in? Listened a lot, said little, learnt my music. Came home with a ‘buzz’ after practice.

Why do you keep going? A few of the choir men have remained friends since I started. I learned to listen to people and found hidden depths in them, and in myself. Brought together by love for music and fellowship with ‘good’ lads.

What was your best experience with the choir?  Not for the faint hearted! Being centre stage at the Royal Albert Hall surrounded by hundreds of Welsh choir men and knowing we were at the peak of learning all the songs we were about to sing.

What do you think would get people to come to the choir?  With the world as it is that is a tough question. Possibly the vision of being a ‘star’, as seen on TV has spoilt the notion of singing as a team (I like to do the occasional solo myself!) For many the last real studying they did was at school, it can come as a shock to find you are starting as a raw recruit! Less formality would bring in greater numbers of those curious to know more, but in the end we don’t want to lose the ‘professional’ quality of our singing and appearance.

What are your interests outside of the choir?  Number 1 – family and our dogs. Then guitar playing, languages – French, Greek and possibly Japanese, though that is taking a while, alpine skiing, until recently rock climbing, tai chi, open-water swimming, learning something new (alto saxaphone), art, singing with The GentleMen. 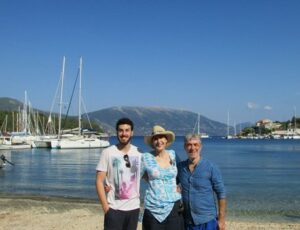 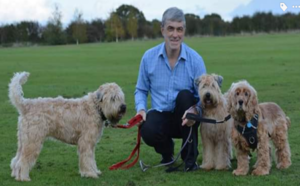