With great anticipation and some excitement our choir made a visit, the first since Covid restrictions were lifted, to our old friends St. Edmundsbury Male Voice Choir (SEMVC) in Bury St. Edmunds.
The alliance and friendship between these two high performing choirs was originally forged by Walter Pitchford, our recently passed choir legend and former Chairman (and every other role), and the Lowe twins. Lynden and Warwick hail from Kirkby in Ashfield. Lynden was a member of our choir in the early 1970s before his military career finally concluded in the Suffolk town. Both Lynden and Warwick now living in the area, became keen members of St. Edmundsbury Male Voice choir and never forgetting their origins kept in contact with Walter. The rest is history and includes Walter being honoured with Associate membership of SEMVC in 2014 and the year Lynden returned to Mansfield and District Male Voice Choir. As part of his role as Concert Secretary Lynden arranged this, as I mentioned, eagerly anticipated trip. It proved to be well worth the wait.

Leaving St. Augustine’s church, our rehearsal venue, on the Saturday morning a coach full of choristers and guests left for Bury St. Edmunds. Free time in the lovely town was followed by hotel check in and early evening meal. Rehearsal of the concert joint pieces was held in the wonderful St. John’s Church in the centre of the town, ahead of the concert starting at 7.30pm.
Musical Directors Ian Grice (M&DMVC) and Mark Jefferson (SEMVC) had planned a well-structured concert with the first half portraying classic male voice standards including, from SEMVC Laudamus and a haunting performance of Steal Away which left you holding your breath in awe. These were followed by Aberystwyth, Sure on this Shining Night and Amen all performed with energy and precision. Mansfield’s traditional section included Stout Hearted Men, a poignant and controlled delivery of My Lord What a Morning, Deus Salutis sung in Welsh, Guardian Angel (translated from the Welsh song Anof Angel) and Let it Be Me. Mark conducted both choirs in a fabulous rendition of Gwahoddiad to close the first half. By now the audience was overtaken by the music and the applause was long and enthusiastic. 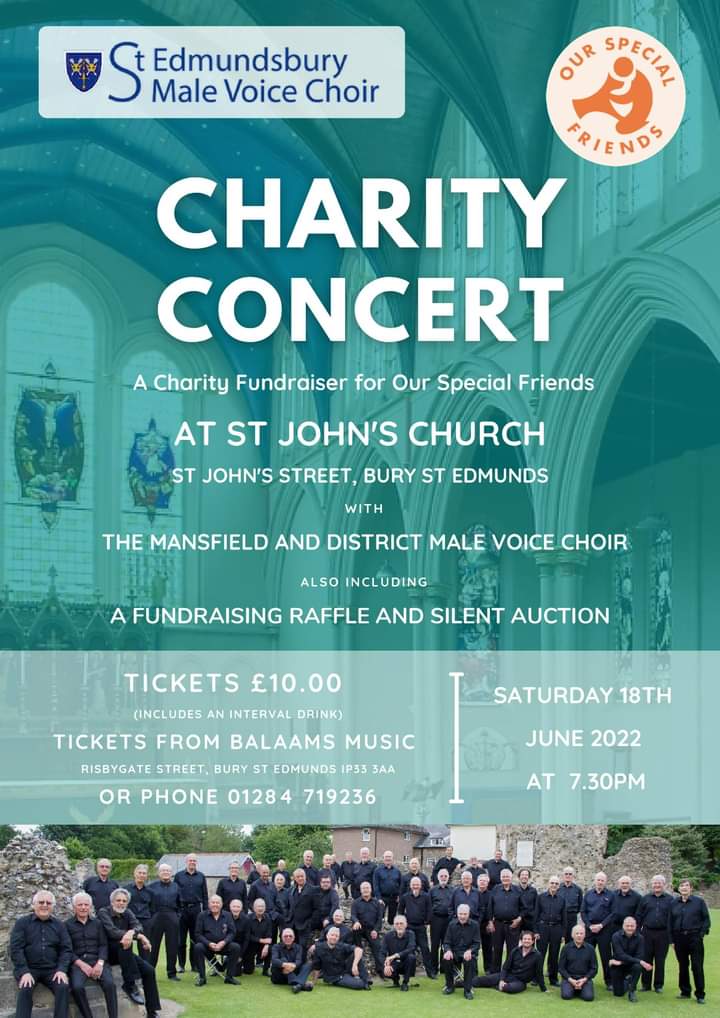 The second half was given over to more modern popular pieces which was a welcome and refreshing change to concerts full of male voice choir classics.
Mansfield opened with an energetic delivery of Shine (Take That) followed by This is The Moment from the Musical Jekyll and Hyde, The Bette Midler classic Wind Beneath My Wings and an adopted Mansfield choir anthem called We Rise Again (from Canada) and closed with African Trilogy. Of note was the solo parts performed by our young chorister Dan Hayes as he led us though both Shine and African trilogy. – well done, Dan!
The second half performance from SEMVC was fabulous containing One Day Like This (Elbow) Seal Lullaby, Walk On By and Anyone Who Had a Heart form Burt Bacharach and concluding with a stirring rendition of Mustang Sally by Wilson Pickett. Ian Grice conducted the closing song “The Rose” sung by both choirs in tribute to Walter as this was his favourite male voice song. – a fitting end to a most successful concert. 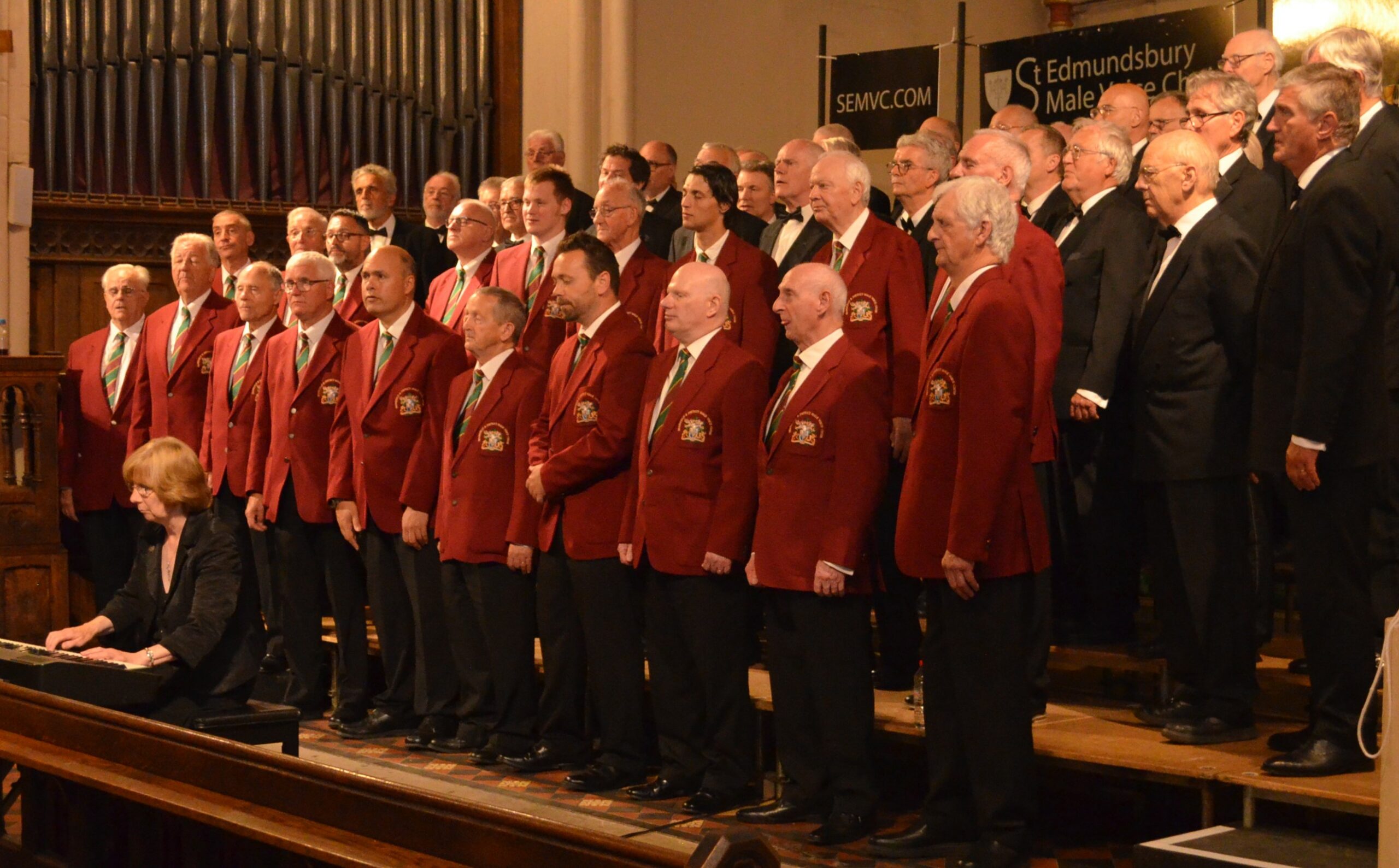 The beneficiaries of the concert proceeds were a charity selected by SEMVC called “Our Special Friends” who, based in Newmarket, aid pet owners who are prevented by ill health of financial constraints from fully looking after their pets.
A pleasant afterglow in the 15th Century coaching inn, The Bushel, with food, drink and song was enjoyed by all and bought to a conclusion another successful meeting of the two choirs – this is what it is all about!
On the way home on Sunday the choir were delighted to sing in the ballroom of Belvoir Castle in the Leicestershire countryside. This was an a cappella afternoon performance which drew an audience from the many visitors viewing the property.
A wonderful traditional afternoon tea including scones and cakes was consumed with relish by the choristers and their guests which concluded a super weekend. As our Chairman John Wakeland was heard to say – “Can we do it all again?” 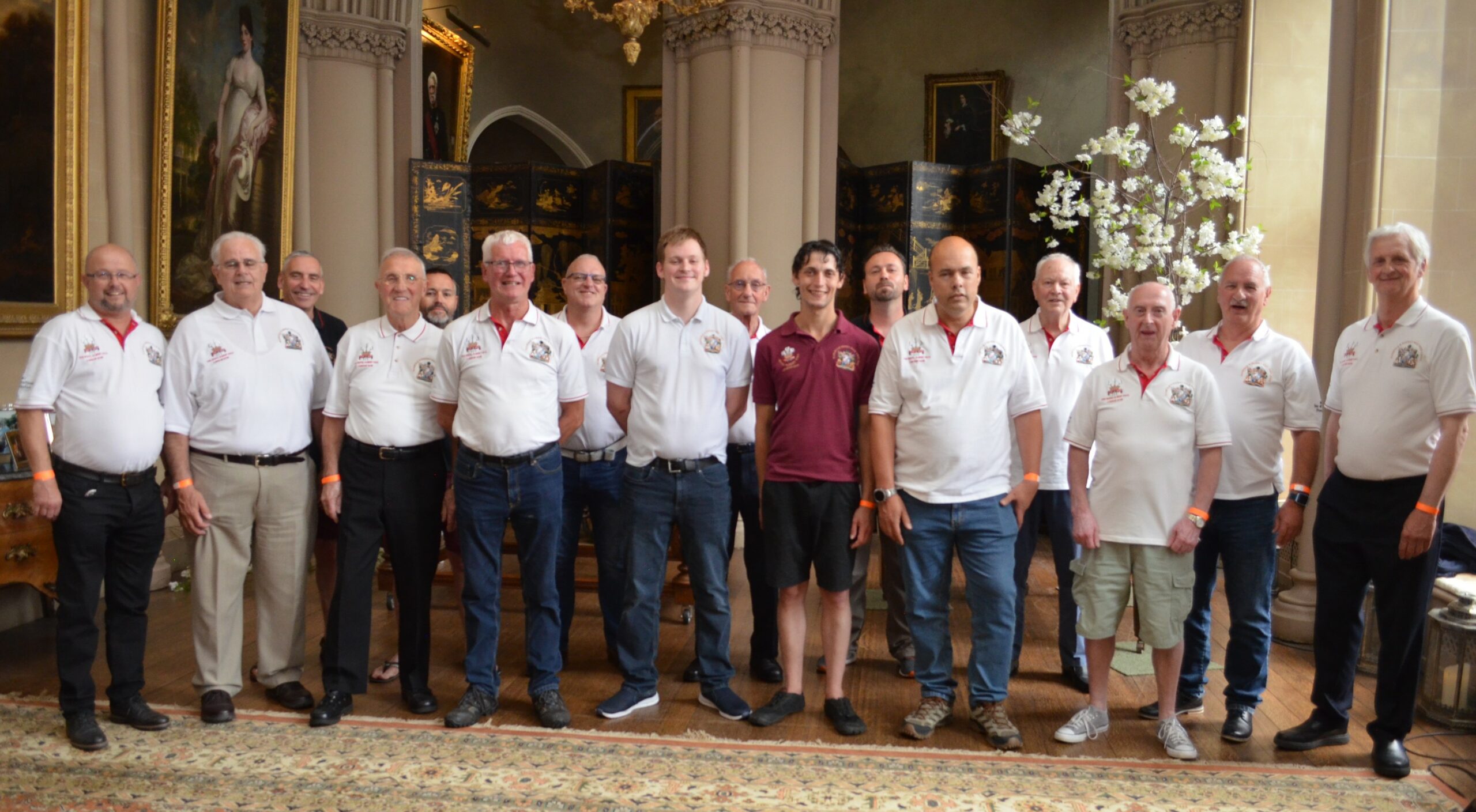 Thanks go to Lynden for arranging the weekend, to Ian for his masterful conducting in preparing and leading us in a great performance and of course to the ever reliable and skilled Margaret (see above) for her guidance and sympathetic accompaniment to our singing. We couldn’t do it without our talented music team. Thanks also go to our hosts and concert organisers, the chaps at St. Edmundsbury Male Voice Choir and of course, belatedly to Walter for forging an enduring friendship between our two organisations.

4 thoughts on “On the Road Again”