Most choirs and organisations have seen membership reductions over the last two years due to the Covid restrictions. Our choir is no different, but we are delighted that we have been joined by three of the keenest choristers we have seen for a while. Each of these three gentlemen have brought light and energy into the choir and their enthusiasm shines through at our rehearsals each Tuesday.
This article serves to put out their message and here is Peter’s lovely comment which reflects the essence of what we strive to achieve.

I keep going because I enjoy it so much and wished I had done it sooner. Young people think its all about hymns but it’s not, it’s more about singing pop music and enjoyable songs. The male voice choir is special; when we practice on Tuesday night, the harmony is electrifying. I would say to any new chorister starters, give it a go, you will be surprised how good it is.

The first of our new choristers is Wesley Pierpoint (2nd Tenor) who joined the choir during Covid lockdown during 2019.
He says: – I was born in Dublin, the eldest of three brothers with David and Nigel and surrounded by a loving family. Music was a feature in our household as my father was a tenor with the YMCA Male Voice Choir in Dublin, my two younger brothers were boy soloists and I played the cornet in a local brass band.
My working career began with my leaving Ireland to join the Royal Marines in 1971 which was followed by a career in the police force until retirement. I have one son who lives in Portishead, Bristol and he is a Civil Engineer.
Throughout my life I have been a keen motorcyclist. I started as a young man but had a bad crash which put me off for several years, in fact until 2006 when I became a born-again biker. Three of my favourite bikes have been a Yamaha FJR 1300, a Honda Goldwing 1800, and a Harley Davidson trike. All three were big machines which allowed Judith and I to tour extensively throughout Scotland and across Europe. The trike was sold just be Covid 19 struck the nation.
I am also interested in building large scale complicated lego models. Recent examples have been the Star Wars Millennium Falcon and R2D2, a model of the Roman Colosseum, a Grand Piano and my next challenge is world globe.
I am a fan of the music of the 1960s and I really like choral singing and this was my main reason for joining the choir. It happened through a series of contacts. Judith works at Sally Twinkles haberdashery (the shop recently sold by David Marriott our choir President) along with Kathleen Kemp, the wife of former 1st Tenor member Brian Kemp. Encouraged by Brian and David I sought out the choir contacts and attended a rehearsal. I am pleased to say that I have settled in very well, I love learning new songs and I keep going simply because I enjoy it. I do have some previous experience as a member of Edwinstowe Theatre Group and I have sung with The Ollerton Operatic Society. Our choir members are great company and the atmosphere is most welcoming. My advice to new choristers is patient, it’ll come; it has taken me a while, but I stuck it out and now feel very comfortable.

Peter Baugh (Baritone) says; I was born in Mansfield Woodhouse in 1958 and family life was tough as the third of six kids to Dad, Pete and Mother, Hilda. My sisters are Jackie, Elaine and Deborah and brothers Ralph and Symon.
I left school in 1974 to work at Pleasley Vale Mill for 2 years then, at the age of 18, went to work at Pleasley colliery. When in 1982 Pleasley mine closed I transferred to Shirebrook pit. After Shirebrook colliery closed in 1993 I worked across Europe for Pickford Industrial installing heavy machinery like textile and forming presses. In 2004 I moved to Valliant Boilers in Belper making household and industrial boiler until I retired in 2018.
I started singing whilst at school from the young age of about 10. Music was always in the house as my dad used to sing and play the guitar and I loved singing with him. My music tastes are wide, but I especially enjoy reggae like UB40 and I love Rock and Roll. My other interests apart from music are sports. I love football and cricket and going to the Gym 4 to 5 times per week.
I joined Mansfield & DMVC in July 2021 having been informed via Facebook. I got in touch with the Musical Director, Ian Grice, who invited me to a rehearsal to see if I would like it. I loved it and have been made very welcome and have settled in very easily. For me, the best about being in the choir is the meeting up for practice on Tuesday evening and having a sing and a joke together. So far, my favourite moment was when I made by stage debut, first concert, at Forest Town Arena at Christmas 2021. I was buzzing all night.
I keep going because I enjoy it so much and wished I had done it sooner. Young people think it’s all about hymns but it’s not, it’s more about singing pop music and enjoyable songs. The male voice choir is special; when we practice on Tuesday night, the harmony is electrifying. I would say to any new chorister starters, give it a go, you will be surprised how good it is.

Trevor Dyson (2nd Tenor) originates from Woodhouse, a small mining village, ten miles southeast of Sheffield. He says: – I was the middle of five children having an elder brother and sister and two younger brothers. My father was a collier working at Orgreave colliery and my mother was a nurse. My father had a fine Tenor voice and I remember him singing along to Mario Lanza and Harry Secombe records, particular favourites were “The Holy City’ and ‘The Lost Chord’ and these songs still bring a lump to my throat when I hear them today.
At a young age I was incorrectly (it turned out) diagnosed with a blood disorder which prevented me participating in contact sports or much physical activity; I was wrapped in “cotton wool” attending weekly hospital clinics for blood tests for most of my childhood. I spent many weekends with my grandmother who introduced me to rambling in the Derbyshire peaks and to a music teacher with whom I had piano lessons which proved useful in later life when I joined choirs. During my time at secondary modern school the initial diagnosis was, by my late teens, thankfully disproven. I had missed out on much, felt angry but enjoyed joining in with some sports, especially swimming which I continued in adulthood. At school I continued music lessons and took part in several concerts: my interest in music constantly growing. It was at school that I met Mary, also from Woodhouse, and we eventually married in 1970 and we have one son, Robert.
When I left school, I was employed at a local timber merchant but as my strength improved, I followed in my father’s footsteps by working at Renishaw Park Colliery and then at Orgreave working above ground. In 1986 I learnt that my job was to be relocated and so I left the mining industry and joined South Yorkshire Ambulance Service and spent 27 years with them as a qualified ambulance man and eventually an extended trained emergency medical technician and a work-based trainer / assessor.
Both Mary and I have always been animal lovers and over the years we have kept dogs, horses, and livestock. Our main interest has always been our dogs and, since 2006, we have successively shown Wire Fox Terriers at all levels up to and including Crufts. Through showing dogs we gained many friends, one couple in particular became very close friends who lived and kept show kennels in Biddulph, Stoke on Trent. Unfortunately, both suffered ill health and in early 2012 we were persuaded to move near to them to assist them with their dogs and I secured employment at North Staffs Hospital in Stoke.
Our friends both originated from South Wales and had contacts and relatives who sang with several choirs and it was they who put me in contact with a member of Biddulph Male Voice Choir. In November 2012 I attended a BMVC rehearsal, given a voice test and the opportunity to join the-choir subject to a three-month probationary period. I sang at my first concert in March 2013 and continued with BMVC for six and a half years.
Sadly by 2019 both of our near friends had passed away and so we made the decision to come back and be near our son and managed to get a property in Warsop. Before moving here in March 2020, I had browsed the internet for choirs in the locality and discovered information and watched the promotional video for Mansfield& DMVC, I made contact via the choir website and received a reply from MD-Ian inviting me to call -in on a rehearsal night once I moved here. Unfortunately, due to covid restrictions I was not able to do so until November 2021. MD Ian and chairman John made me welcome and I was introduced to the rest of the choir members, my intention was to sit and listen in but I was soon issued with some music and encouraged to join in. I find them all friendly and sociable and Tuesday nights can’t come round quickly enough, a couple of hours singing on a Tuesday night leaves me on a bit of a high. The guys are in harmony both in singing and in attitude (including the ladies) and give off a positive feeling and there is no shortage of witty banter.
Being in a choir is never boring, learning your part can prove testing at times but with practice and assistance from your fellow choristers is all the more rewarding when you perform in concert, and it all comes together
My music preferences today cover a broad spectrum ranging from-classical, musical theatre, military bands to more modern. Music touches on every emotion and influences our everyday life, each and every one of us can connect to music whether you listen to the car radio, attend at a concert or show, go clubbing, sing or play a musical instrument. Even your favorite TV programme or film usually has a theme tune you connect with. Music as always been of special interest to me and belonging to Mansfield and District Male Voice Choir gives this interest a voice; I thoroughly recommend it.
Left to right, Trevor, Peter and Wesley. 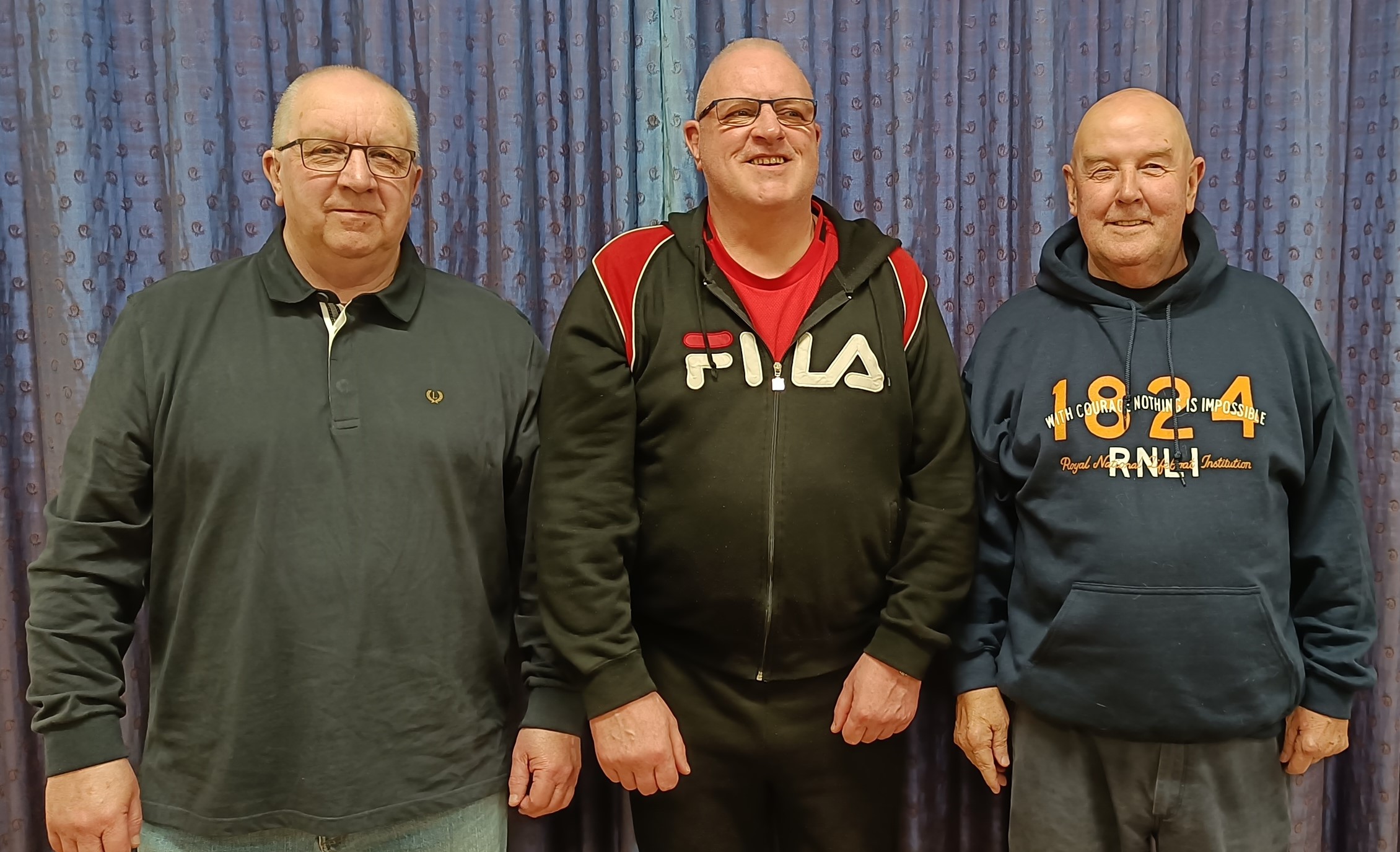