In the 8 days commencing 23rd April, Mansfield and District Male Voice choir performed in three charity concerts which in total raised nearly £6,000. The concerts were:

All three were sell out concerts and fabulous evenings enjoyed by all participants and audiences alike.
Here is a summary of each.

Concert for Hetty’s
This concert had been planned since 2020 but of course were were thwarted several times by the Covid lockdown procedures. It was worth the wait as both choirs performed out of their skins. Sonara were conducted by Helen Beresford and we were delighted to hear their rendition of Here Comes the Sun, And All that Jazz and America amongst their two appearances performing eight songs. The highlight was undoubtedly their last number which was a luscious performance of the Scottish / Irish / Celtic adieu The Parting Glass which was delivered with highly controlled soft singing making the audience hang on every word.
The Mansfield and District Male Voice Choir conducted by Musical Director by Ian Grice brought contrast starting with the male voice classic “What Would I Do Without My Music” before singing two Welsh songs, one sung in Welsh namely Deus Salutis followed by Guardian Angel. Favourites You’ll Never Walk Alone, The Wonder of You and World in Union were loudly applauded and cheered by the appreciative audience. Two male choristers made their debut for Mansfield &DMVC: Wesley Pierpont and Trevor Dyson were enthusiastically introduced and welcomed not only by the choir but by the audience.
We are most grateful that the event was professionally compered by Mr. Tony Delahunty the Owner Managing Director and Radio Mansfield and what a great job he did as well. Armed with copious notes and amusing stories Tony guided the audience through the evening and really made the evening upbeat and uplifting. The Mayor of Mansfield Mr. Andy Abrahams also came along and was demonstrable in his support and enjoyment of the concert; it was great to see him with us.

Margaret Ball made a stupendous contribution to the Hetty’s concert. As Covid had claimed Teresa Mills, Sonara’s accompanist, Margaret stepped up and played for both Mansfield & DMVC and Sonara having only received the Sonara’s repertoire three days before. She saved the concert. We are indebted to your skill, sense of responsibility and kindness Margaret.

Hetty’s charity did an excellent job not only in providing wonderful refreshments, along with the Mansfield and District Male Voice Choir Supporters’ Group, but also in explaining the worthy work of the charity. Tracey Crosby and Craig Knowles outlined the support given to over 200 families per month all of whom are experiencing the pain and heartbreak of a loved one’s drug and alcohol addiction and helping them to return to their everyday life. Each intervention provides the tools needed for families to reduce isolation, increase confidence, set appropriate boundaries, become more knowledgeable about the cycle of addiction, and work through any feelings of guilt, shame and anger. This is a most professional service and relies totally on donations and the choirs were pleased to help.

Concert for Ukraine, Ravenshead Village Hall
Our choir were guest performers at this concert, and we were keen to be involved. Not only were we delighted to share a stage with young performers but also a renowned and highly entertaining swing band and a fabulous soprano soloist; Sarah Carlin.

The contrast and variety in our programmes made the evening. We were treated to a show opener of The Muppet Show theme from the combined Joseph Whitaker and Redhill Academy Swing Band and then mesmerised by seven differing young soloists including a violin duet, solos on trombone and violin, a clarinet duet, and the famous Puccini classic O Mio Babbino Caro from Sarah. The choir were on first in the second half with a more modern repertoire including “Shine”, “Let it Be Me” and “You Raise Me Up” and the first public performance of a medley of songs by Tom Jones.
The Ravenshead Swing Band set the place alight, everyone was toe tapping, even dancing to “In The Mood”, “Moonlight Serenade”, “American Patrol” and “Shake, Rattle and Roll” whilst Sarah cast her spells by singing Summertime, Cry Me A River and Big Spender. The final two items were
” I Will Survive and “Y.M.C.A.”. Never before has any of our concerts featured these songs and it was wonderful as was the final total of £1,700 raised for Ukraine.

Here are a few comments from audience and participants:-

Our choir secretary Eileen Lawrence was sitting next to the solo violinist and she was full of praise for choir’s singing. Eileen said that she had been concerned about the choir being smaller than in previous years but she said, ‘You don’t need a large choir to be a good Choir!’ She said that she could hear every word and that the harmonies were excellent and that she thoroughly enjoyed the performance. Praise indeed from an excellent musician.

Hi to everyone in the choir
Can I just say a massive thank you to everyone for being part of our concert last night- you were fabulous!
It was such a varied and enjoyable evening and the audience loved it! The combined item at the end (“You’ll Never Walk Alone”) was so powerful and uplifting. We’ll keep in touch and hopefully do more concerts together. Thanks once again.
Carolyn Beedle, Musical Director of Ravenshead Swing Band.

Wow,wow,wow what a fantastic night tonight performing with the Ravenshead Swing Band and the Redhill / Joseph Whittaker combined jazz group. A packed audience at Ravenshead village hall witnessed a superb program and money was raised for the DEC Ukraine appeal. The choir sang out of their skins and I am so proud and could hug each of you. Thanks to all taking part and to our audience.
Ian Grice, Musical Director Mansfield and District Male Voice Choir

With around 135 men on stage being conducted by differing conductors the sound was truly amazing. Many of the male voice standards were performed together with songs for audience participation including Edelweiss, Imagine, Danny Boy, How Great Though Art and many other favourites. Involving the audience certainly gave pleasure to both audience and choir members and it made for a wonderful uplifting evening. In six weeks, there was no time to learn new pieces and it is surprising what determined men and clear conducting can achieve.
Here again are some comments from audiences and participants. The concert raised £3,000.
Well, 3rd concert in 8 days and the 2nd supporting the Ukraine appeal. Super night in Daybrook with Bestwood Male Voice Choir, Carlton Male Voice Choir, Sandiacre Male Choir, Radcliffe on Trent M.V.C. and South Notts Men’s Chorus .The singing was so powerful with songs chosen to reflect our feelings, also for the audience to sing along too .Thanks to Reverend Jackie for loaning us St.Pauls for the evening.
Ian Grice, Musical Director Mansfield and District Male Voice Choir

Once again a huge thank you from me to all of you and your choir members for all your contributions and for making the evening a great success. I thought the choirs produced a fabulous sound and were very disciplined in following each MD. Please thank them all again (including accompanists) at your next rehearsals for a great performance. I hope that they are all still intact after their standing marathon.
It was good to work with you all.
Best wishes to all.
Mirek Rus, Musical Director Bestwood Male Voice Choir

What an incredible night! The hard work paid off in the end. Thank you to Ian Watts and Carlton MVC; Ian Grice, Margaret Ball and Mansfield & District MVC; Victoria Barlow and South Notts Men’s Chorus; Deborah Davies, Sue Bennett and Radcliffe on Trent MVC; Stuart Graham and Sandiacre MVC; and to our own Mirek Rus and Philip Miles. Also to Katharine Dryden and David Machell.
An almost full house audience really appreciated the performance and were generous with their applause and donations.
We are delighted that the evening, with a little help from our Just Giving page, raised just over £3000 pounds for Ukrainian charities.
We also couldn’t have done it without the team at St Paul’s Church, Daybrook.
Thank you to everyone!
Bestwood MVC Just Giving page

A special thanks should go to Mansfield MVC and the family who provided the ribbons in the Ukrainian colours .This concert was an excellent example of how Nottinghamshire Choirs can work together to raise money for a good cause. Another thanks to St Paul’s Daybrook who let us have the Church free of charge and provided refreshments.
Well done one and all.
John Pritchard 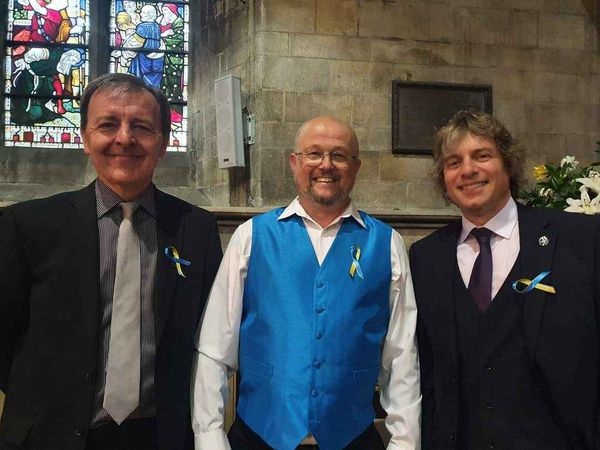 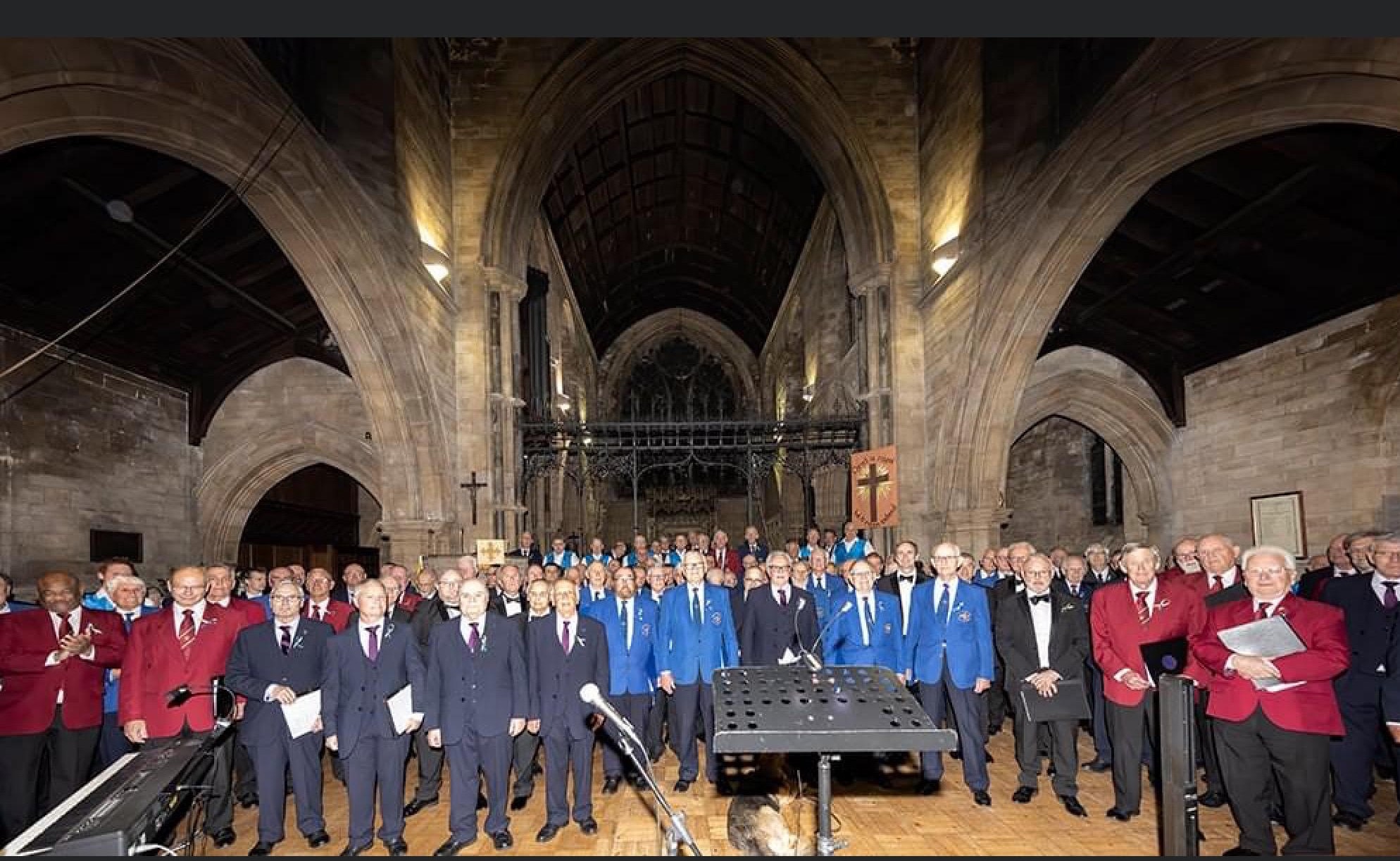 3 thoughts on “Three of the Best”