It seems our blog posts all carry sad news about the passing of our dear friends. I cannot apologise for celebrating the life of two of the choir’s ardent fans, namely Jean Hales and Hilda Eddershaw.

Jean Hales lived and breathed our choir as Choir Secretary for 12 years between 2002 and 2013. Coincident with the years when Meryl Chambers was our MD and Margaret Ball, who still is our accompanist; Jean, Meryl and Margaret represented the steadying feminine hand of realism, care and calm when “the lads” naturally became over enthusiastic in their singing and camaraderie.
Jean unselfishly and genuinely served the interest of the choir as the first non-singing and female member of the choir committee, and she did a great job. She was definitely the choir matriarch holding together all the choir administration and officially representing the choir in our links with local businesses, theatres, dignitaries and of with those choirs of fellow choirs with whom we have shared a stage. Lynden Lowe, a Bass section member, who was previously concert secretary in the St Edmundsbury MVC said that Jean was the most efficient Choir Secretary he dealt with when he was Concert Secretary for SEMVC. 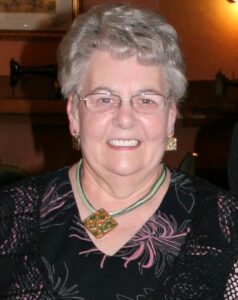 Jean will now be with her husband Denis, a former Bass section singer, who sadly passed in late 2020. They were not separated for too long. Jean and Denis have three children, had travelled extensively in the UK and were also active members of the Old Mansfield Woodhouse Society. Following her passing on 7th June 2021, the family service was at St. Edmunds Church, Mansfield Woodhouse and a burial at Mansfield Cemetery where representatives of the choir paid their respects.

Hilda Eddershaw
Hilda was amazing; a determined and independently minded character who always sought the best in people and who had hundreds of friends. Born in Becontree, near Dagenham, and evacuated to Bedford in WWII, Hilda trained as a secretary. As a member of the Territorial Army, she met her husband John who was a military policeman in the R.A.F. Hilda was especially proud when John was awarded the British Empire Medal. John and Hilda lived in Germany, Aden, France and the UK. After the RAF John was a probation officer and Hilda became a Community Services Supervisor, testament to their caring and community minded attitudes.
Hilda and John led a very full life, travelling all over the world and they owned a house in Brittany. They were truly party animals and keen on entertaining friends. Sadly, John predeceased Hilda in 2007.

Hilda joined many social groups and was an active fan of the choir becoming a member of our Supporters’ Group. She didn’t miss a concert, social event or a weekend away for about 10 years and was always known for her smiling, energetic, happy nature which was marvellous to see in an octogenarian. Generous with her time and always willing to help Hilda was always positive and outward looking; keen to meet as many people as possible. A true measure of the esteem in which she was held was demonstrated at her 90th birthday party where she entertained over 140 guests including her best friend of over 60 years.
Despite her daily walks and exercise routines Hilda passed away on 11th June 2021 aged 93; a real loss to those that knew her and to her many colleagues, friends and their family members.