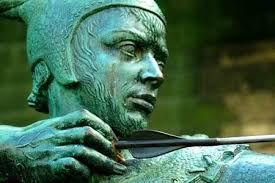 Someone ( not from the area) once offered an opinion  that Mansfield was famous for two things: coal and beer. The two went together  as coalminers, the world over, tend to be a  very thirsty bunch.  It was the demands of the working man in the town and immediate area which caused the Mansfield Brewery to grow very rapidly after its initial inception in 1855. Coal mining and beer production were significant employers in the town but no longer, I’m afraid

Sadly neither of those two commodities (  which are, it has to be said, major contributions to the human race) are produced in the town and the story surrounding the demise in both cases is too complicated to go into on this website. Because coal mining and the brewing industry were such a vital part of the local economy we cannot deny that  Mansfield and the whole district has suffered its fair share of  the effects of industrial decline. But life goes on; Mansfield is home to approximately 100,000 residents who live here, go to school here, bring up families, earn their livings and run successful businesses and, of course, sing!

The famous novelist DH Lawrence ( a native of Eastwood just down the road ) once referred to Mansfield as a “once romantic but now utterly disheartening colliery town”. Mansfield has never featured strongly in tourist brochures! However many visitors who do come will note that evidence of heavy industry can be difficult to find, nature having reclaimed her own on the old colliery sites and interesting walks can be taken on the sites of former spoil tips.

But we can imagine, with our illustrious author, a pre-industrial era and the  little forest town with its thriving market, nestling in the Maun Valley and positioned right in the heart of the ancient and renowned Sherwood Forest and providing, as it did,  hospitality to many an historic VIP on their way from Nottingham to the North. A romantic place indeed!

There have been a few individuals of note, born and bred Mansfield folk, who have sparkled on the world stage (for example  the Olympian swimmer Rebecca Adlington and the Paralympians Ollie Hynd and Charlotte Henshaw) but, as for fame, I’m not sure the town has those sort of aspirations. But  putting a little bit of romance into Mansfield & District, now that would be nice. We like to think  that  our Choir with its passion for singing and, perhaps more importantly, a passion for sharing the love of music with our communities can make some contribution!

There are numerous choirs in the District which provide ample opportunity for singers to enjoy the pleasure of musical performance. Perhaps the most famous, apart from the Mansfield and District Male Voice Choir of course, is the Cantamus Girls Choir which was founded by Pamela Cook ( 1937-2013). Cantamus was very well known locally and achieved considerable success in international competition overseas. But the greatest recognition  of a born and bred musician from Mansfield were the considerable achievements of a concert pianist John Ogden. Just think of the many thousands of musicians who aspire  to earn a living from their art but recognize perhaps at an early stage that their talent is just not sufficient. John Ogden won first prize (jointly with the acclaimed Vladimir Ashkenazy ) at the International Tchaikovsky Competition in Moscow in 1962. This was just one of many considerable achievements and the people of Mansfield are extremely fond of his memory ( he died in 1989 ).

As we’ve mentioned already, Mansfield was the original “forest town”. At the top of Westgate in the town centre there is a plaque with an inscription which informs resident and visitor alike that, on that precise spot stood an “ancient tree” which was recognised as the very centre of Sherwood Forest. In the 13th century the Forest extended from the north of Nottingham to the north of the county which we refer to now as the Dukeries. The original medieval sense of the term “forest” was closer to the modern idea of “preserve”. Forest law was designed to protect, for the benefit of the king, venison and the noble “noble animals of the chase” notably red and follow deer, the roe deer and wild boar.

It was William the Conqueror, a great lover of hunting, who had established the system of forest law, a system which was totally at odds with the Anglo Saxon common law system which had prevailed before the Conquest; the common law had never protected hunting in this way as the preserve of the king.

Indignation and resentment among the common people reached a climax during the reign of King John, a bad king by any standards. The inhabitants of the forest, inspired by folklore memory and having been denied their historic rights began to fight back. Some young men began to gain notoriety in “stealing” the kings deer to provide meat to hungry poor people. The Sheriff of Nottingham, the local representative of the king, made it is intention to track down and hang these criminals. The leader of the band of the outlaws was a hero of heroes and a  figure recognized in all countries and in all generations as a fighter of oppression and a champion of the down trodden – Robin Hood!