Only about a month after the death of his friend Geoff Shooter, we lost anther of our bass choristers: Dave Sipson, aged 85.
Dave was a choir member between 2011 and 2019 and it was Geoff who introduced him to choir after meeting at the Manor Park Bowling club in Mansfield Woodhouse. Upon hearing of his passing here are just some of the tributes paid to him.

Very sad news about Dave and coming so soon after the death of his best friend in the choir too. Dave did not say a lot, rarely expressing his opinions, but I do know that he enjoyed his time with us.
Phil Robinson, Bass

Sorry to hear this news, I spent a lot of time next to him in the choir, he was a good man R I P Dave.
John Gregory, Bass

David Alfred Sipson, from Mansfield Woodhouse, was the second child of four in the close-knit family of Albert and Ada. His younger sister Jennifer recalls their attending chapel three times each Sunday and an incident when David nearly blew up the house playing with his chemistry set.

After being educated at Oxclose Lane and York Street schools David was conscripted into the Army during which he was stationed in Cyprus and was involved in the conflict of the 1955 – 59 Cypriot War of Independence. After his national service Dave worked for Wood brothers and drove lorries for the railway after passing his H.G.V. licence. Subsequently he worked on the milk lorries collecting milk churns from farms and finally delivering coal to power stations. 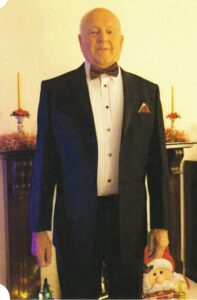 David and Patricia were married in 1962 and had two daughters Jane and Elaine. He loved spending time with his children and 5 grandchildren. Following the death of Patricia, he moved to Clowne to be nearer Jane as Elaine had emigrated to Australia. We can recall his excitement at making at Aussie visit, during which he sang at the wedding of his granddaughter, Laura.

Dave had a full life, was keen on football and snooker and although he was a rather quiet chap he was full of fun. He loved his time with the choir and was most proud to sing at The Royal Albert Hall in 2018. Each year the choir gives a fantastic Christmas concert at Forest Town Arena and we have an iconic photograph of Dave as Father Christmas with a magnificent beard. This is how we shall remember him. R.I P. mate. 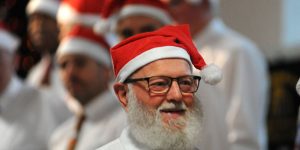