These adjectives, delivered as part of the tributes and eulogy, marked the passing of Bob Holloway who was a fervent and continually active member of the choir for 40 years.

Born in Skegby, the youngest of three boys, Bob suffered poor health until his teenage years which meant that his schooling was incomplete, but this did not hold him back. As you can tell from the character references above, he set himself an objective and through ten years of night school and further education attained the status of Chartered Engineer. He worked for the Coal Board for all his career, retiring in 1986, and was especially well respected for his ability to diagnose and resolve mechanical, engineering and organisational difficulties. He followed his time with the NCB as a mining consultant advising other mining companies both here in the UK and abroad.

Married to Pat, who died in February of this year, for 62 years, they raised two children whilst living at Wild Hill, Teversal, and delighted in their three grandchildren. Bob and Pat were utterly devoted to each other and they both participated avidly in their hobbies of motorcycling, 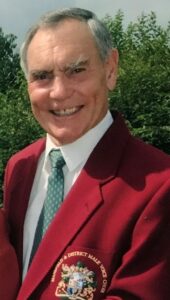 gardening, looking after their numerous dogs, cruising and of course, singing, and for Bob this was the Mansfield and District Male Voice Choir.

Bob was a boy chorister at the church of today’s ceremony, St. Andrew Church, Skegby, which no doubt piqued his interest in singing. He joined the choir in 1973 and was a second tenor until 2005 and then spent 8 years as a member of the baritone section. Such was his passion for the choir he ably contributed much to its efficient running as Secretary between 1980 to 1984, Treasurer 1992 to 1994 and for two incumbencies, Chairman in 1994 to 1996 and 2001 to 2002. He was at the forefront of decisions which strengthened the choir’s links with the choir of Mansfield’s twin city in Germany, the Frohsinn 1867 Male Choir from Heiligenhaus. He organised exchange visits which feature as a highlight in the history of the choir. His daughter Claire stressed what an important part M&DMVC had played in Bob’s life and how proud he was to have been a member for all those years.

On New Year’s Day 2020, due to Pat’s failing health, Bob and Pat moved into Woodleigh Christian Care Home and an account of his residency there was emotionally explained by their chaplain Helen Curzon. It certainly felt like home to Bob and given his resolution, individuality and determination didn’t falter or perhaps even desire to fight the Covid 19 diagnosis he received earlier this month.

At the service today all the music was all from the choir’s 1978 LP “With a Voice of Singing”, recorded when Bob was a member. We heard the title track and also Morte Criste, Hush Sweet Lute, Bushes and Briars, The Lord is my Shepherd and My Love’s an Arbutus. These songs were selected by the family from a  CD of the LP record kindly and ably prepared by our current Chairman John Wakeland.

As we say goodbye to our colleague and friend let us take comfort that his strength of character perpetuated the life of the choir and saw him through life’s challenges to reach the fine age of 87. Well done sir!