I’m not sure that the usual title, “I love to sing” applies to me, but I certainly love to hear the men sing! I have been to virtually every concert, which the choir has been part of, ever since my husband, Howard, joined in 1997. Only the occasional work commitment and holidays have kept me away. Since becoming Secretary in April 2014 I have also attended all of the Tuesday practices so I think that I know many of the pieces as well as some of the men. My husband is surprised, at times, when he is singing the first tenor part at home that I join in as a baritone. (I sit next to them at practices!) This article follows on from the one which was posted about my husband on the website last month.
As a child I lived in Huthwaite where I learned to play the piano from the age of seven until my mid-teens, reaching Grade 7 in piano exams. I was lucky that my music teacher was keen on encouraging her pupils to perform in public so from an early age I took part in many local concerts performing, usually, for ‘seniors’ groups as well as competing in piano sections of local music festivals in solo classes and also duets with my friend, Glenis. It was also usual for me to play for Sunday School etc. at the Sutton Road Methodist Church where I had grown up and was a member. When I was about sixteen, Mr Annabel, who was the chemistry teacher at Brunts Grammar School where I was a pupil, became organist at chapel and he offered to teach Glenis and me to play the organ. There was a lovely pipe organ in the church and I always felt that this was a great privilege. The magnificent sound was so uplifting. I must have made reasonable progress because I was allowed to play regularly for morning service and, at times, played for funerals though they never let me loose on weddings!

Eileen on her 21st birthday

I met Howard, while I was still at school, in 1962 when he was brought to a meeting at our church by the, then, minister who was actually in charge of The Hill Church at Kirkby, where Howard went, as well as my own. We had a fairly long courtship as, from 1964 to 1967, I went away to Dudley to train as a teacher. Shortly after qualifying as a primary school teacher we got married and three weeks later I began my career at Forest Glade Junior School in Sutton. Through my 38 years in the profession I taught mainly junior age children but I did have two years with infants once! Whilst primary teachers cover all subjects my first love was always maths. In my third year I was given class 4B (top juniors) and, when on exploring the cupboard in my new classroom to find what resources were available, found a complete set of maths text books which included sovereigns. Stupidly I suggested to the head teacher that we could disposed of them. He was not amused! (This was just before decimal currency came in!) I spent all of my career in the Sutton area progressing through the ranks and during that time played the piano for all kinds of school events and taught many children to play the recorder, which I have always felt is a great skill for them to have as it teaches them to read music, making it easier to move onto higher things musically. 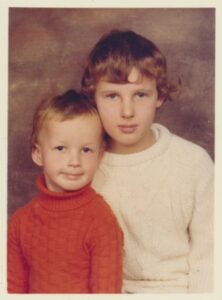 Graham and Richard aged 7 and 2

In December 1968 our first son, Graham, was born followed nearly five years later by Richard. We had a lovely time with our sons taking them all over the country by train and a little later, also by train, to Europe mainly to the Alps, where they shared our enthusiasm for the mountains and also developed our love of all types of railways, which is still with them both today. We also had a touring caravan for some years and that allowed us to travel widely in the UK too. I was lucky that, as a teacher, the children spent their primary years at the school where I taught at that time but I did ensure that they were never in my class! When the boys and I were on holiday, but Howard was at work, we also used to go out widely by rail. Howard and I still have a touring caravan which we use extensively and Richard and his partner, Jo, have also caught the bug and are always keen to borrow it.
Even though we settled in Skegby when we married, we still had links with our former churches and in the early 70’s I received a surprise and a great compliment by being asked to conduct the Annual Sunday School Anniversary in Huthwaite. At that time there were two Methodist Churches in Huthwaite and, once a year, the Sunday Schools combined to take part in the event. It was a highlight of the churches’ year with a large stage built to accommodate considerable numbers of children who were backed by the two four-part adult church choirs. I had never done anything of the sort before, so it was very daunting. For the first few years it was a traditional Sunday school anniversary of poems, readings and songs which was not too difficult for me but eventually they had the idea of moving on to performing religious musicals. The first one they chose was Joseph and His Amazing Technicolour Dreamcoat and I was scared stiff! It seemed to go OK and in subsequent years we performed a variety of other musicals, often composed by Roger Jones, including ‘David’, ‘A Grain of Mustard Seed’ and ‘Greater Than Gold’. You do not know what you can do until you try it! None of them were as daunting as Joseph! Incidentally, that was the first time that Howard had ever performed a solo, singing the Baker in Joseph.
Whatever Howard and I have got involved in throughout our 50 something years together we have always joined in and supported each other even though he does get fed up of me at times and tells me that I should do less!!
In the late 1970’s I became a school governor at the school where I worked at that time and I stayed with them for over 40 years even after I left the school. I also became a governor of Forest Glade School about 15 years ago and I still do that. I have chaired the Finance committees for a long time and am often involved in interviews and head teacher’s appraisal making it an extremely interesting but time-consuming thing to do. About 3 years ago I joined our local doctor’s surgery patient’s panel and I am now secretary of that group. That is also very interesting.

The final thing about myself is that I love to plan holidays. Very rarely have we used package tours – only for long haul.
I can spend hours sorting out hotels, camp sites (we prefer the maximum 5 van sites), ferries, trains, routes and so on. At times Howard thinks I have got lost in the computer!
My story with the Choir
For over ten years I attended Choir events and concerts and got to know quite a few people but, sometimes, ladies were at concerts, taken by their husbands or partners very early, but who then had to leave them to have a preconcert practice with other choirs or just a warm up, which left the ladies in a fairly empty building not knowing anyone and this concerned me.
Talking to my sister, who lives in Sheffield, she told me that she and her husband had joined the Worrell Male Voice Choir Supporters’ Group. I asked her why they had joined and she told me that it was just because her husband played golf with some of the choir members so it was nice to attend concerts and social events. This set me thinking.

In July 2012 many of the choir members went on a choir holiday to Wales staying in Llandudno and Tenby and doing a number of concerts, one by ourselves and three with other MVCs. During the stay in Llandudno Howard and I shared a table for meals with Marilyn and Geoff Mansfield. Over breakfast one morning we discussed the Worrell Choir and their supporters’ group and started to consider whether this would be good for Mansfield. We all concluded that it would help the choir families and friends to get to know each other by holding more social events and could also help to generate funds for the choir. Geoff put the idea to the committee who agreed and an invitation was sent out to all ladies who we thought might be interested to attend a preliminary meeting. There was a good turn out and about 15 ladies agreed to join. I became the first Chairman and we started meeting regularly, discussing ideas and planning events. These ladies try very hard to make sure that newcomers are always welcome at anything in which the choir is involved and we have had many very successful events through the years raising a considerable sum of money. Another spin off of the many social gathering has been that the choir members have got to know each other better because there is time to move around and chat whereas, previously many of them only really knew their own section.

Early in 2014, prior to the AGM, Geoff Mansfield, the then Chairman of the Choir, told me that the Choir Secretary was planning on retiring at the April AGM and, to my surprise, asked me to consider standing for the role. After some thought I agreed and was elected in April 2014. It has been a pleasure to serve with this committee as it has always been well organised, efficient and amiable, greatly helped by the friendship and enthusiasm of our music team, MD Ian Grice and accompanist, Margaret Ball. I have really enjoyed many tasks as secretary: I like designing and making posters and tickets for concerts, compiling and producing newsletter for members and supporters, receiving unexpected letter and phone calls as well as being involved in all that is going on as well as the more every day ‘stuff’. You never know what to expect. 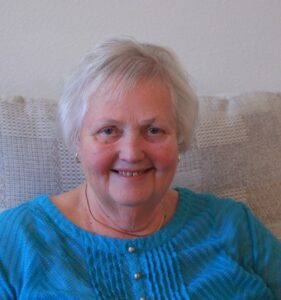 Eileen at home on the sofa

When I became Choir Secretary, I stood down as Supporters’ Group Chairman and was succeeded by Sue Bartle and later Marilyn Mansfield, who have led the group from strength to strength. It has been good to see a variety of new members joining the Choir and the Supporters’ Group and I feel the whole atmosphere of the wider Choir family has really benefitted from getting to know each other better. I would like to say thank you to all of the choristers for making me welcome in their male domain although there are now more ladies at practices, as the Supporters’ Group provide them with refreshments on a rota basis! I never get tired of hearing the Choir sing and am fascinated to witness how new four-part songs develop, often quite quickly.

Finally, I wish our lovely choir family every success for the future.

Eileen & Howard celebrating their 50th Wedding Anniversary with family and friends.
The Choir and several soloists performed at the event and the ladies of the
Supporters’ Group provided a wonderful array of desserts! The family and close friends really enjoyed the event. Thanks go to the choir for their input.

1 thought on “I love to listen! – Eileen Lawrence”