Eric has been the choir treasurer; since he has a background in accounting and marketing, since 2014. You will see that he has a wide range of interests and is always looking forward to the next new thing to add to his skills. He occasionally supports our choir at the piano under the watchful eye of our accompanist Margaret Ball. Eric sings 1st Tenor and here is his story.

I was born 56 years ago at King’s Mill Hospital in Sutton in Ashfield and grew up in a musical family. My father and older brother played piano and my mother sang. Until the late 1970s dad played music from the 1940s to the 1970s in local pubs and clubs, with my mother occasionally singing along. He proudly held a certificate awarded in the 1950s for being voted Nottinghamshire’s best pub pianist. His style was a cross between stride piano and ragtime. Stride pianists took the basic left-hand “oompah” rhythm of ragtime, but played it with more swing and complexity, while the right hand played the melody and improvisations upon it. In those days pubs and clubs had a piano (no keyboard to carry around) and of course, dad used to get bought quite a few drinks which were lined up on the top of the piano. We went home by taxi. 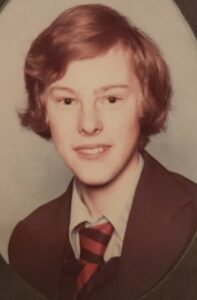 My brother learnt the piano predominantly as a classical pianist, achieving grade 8 followed by a music degree at Sheffield University. So, I was influenced by a combination of both my dad’s style and my brother’s classical music. Family discussions as to who was the best pianist usually resulted in dad being declared the best, my brother next and myself as a keen, but third place. Recently I have started learning more about jazz and boogie woogie playing but still cannot match dad’s skill.
I enjoy a wide range of music from Queen and, due to my father’s piano playing, music from the forties onwards; particularly the old crooner type of song, big band numbers, jazz, ragtime and boogie woogie.

Music from stage shows and musicals are among my favourites as I grew up performing in dramatic societies. My first public appearance, at the age of 6, was in a school production of the musical Captain Noah and His Floating Zoo. Between the ages of 12 and 36 I have been involved in over 300 theatre productions be they plays, musicals, pantomimes, variety shows including 3 different productions of The Sound of Music, 2 productions of Fiddler on The Roof and many others including Barnum and Brigadoon. In some shows I assisted with lighting / sound and in others, stage work, follow spot work, prompting, acting and even writing the production and directing. I loved it.

Julie and I were married in 1999 and we have two lovely children. Timothy sings in the choir and is currently at University in Nottingham studying Astro Physics and Natalie studies Dance at Derby University. Both have contracted the theatrical gene and are active in local music and theatre productions.

I joined the choir in 2012. Our family was on a walking weekend with a small group from our church, and Gordon Blanc and I began chatting. We discussed our interests and he invited me to give the choir a try the following Tuesday. It was like going home; I saw so many people that I knew and I settled in immediately. I keep going, partly because I enjoy performing in a different medium to theatre but also because there aren’t many activities in society that bring people together in the same way that a choir does. The bonds that form between the members of a choir very often last a lifetime and I have been moved by how deep the bonds are between the members and how genuine the spirit of camaraderie. My first two performances with the choir are my most memorable. In September 2012, I made my debut when the choir gave a concert at gospel church in Nottingham and then in November 2012, we performed with the Syd Lawrence Orchestra at the Derby Assembly Rooms. 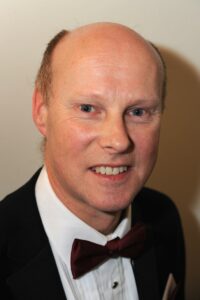 Male voice choirs, to some, can have a rather staid, old fashioned image but this has not been my experience in our choir and in many other choirs with whom we have shared a stage. Today, choirs entertain their audiences. It is important to have a varied repertoire of classic male voice standards and modern songs which attract a wide audience and a balanced membership of older and younger choristers. We have been fortunate in the Mansfield and District to have several young people in the choir, including our son, Timothy, who joined the choir at the age of thirteen and is now fast approaching his 21st birthday. We are always pleased when our audiences experience a range of emotions; laughter, sadness, reflection, intrigue and excitement keep folks on the edge of their seats and eager for more.

I have a lifelong interest in the creative arts, hence drama and music but I also enjoy writing. Running the drama groups required me to write a lot of the material for our sketches and plays (there are about 70) but over the last 10 years or so I have taken to writing novels of which there are now seven. I intend to self-publish these in the next 18 months. Julie and I also enjoy drawing. Although I play piano, I do have two violins at home, which I will get out occasionally and attempt to play. I used to play drums for a short period in the music group at the church that we attend as a family. I would also really like to learn to play the alto saxophone, which I intend to start putting into practice in the next 12 months. As you can see, I don’t like being idle.

To encourage new members I would say, grab every opportunity with both hands and enjoy the experience. Upon joining the choir, some people remain members for many years, while others only stay for a shorter period due family or work commitments. However long a person stays the choir, membership will have a lasting positive effect on them; the experience will stay with them for a lifetime.