In our series “I love to sing!” about the characters in our choir here is a biography of Ian Bartle. Ian is a true and faithful member of our 2nd tenor section. He loves everything to do with the choir, not only is he a perfectionist singer and an occasional concert compere, he has contributed to the running of the choir as Membership Officer through his attendance on the choir committee. He always volunteers to help, has established up maintains the Health and Safety requirements for our choir and has a designated role at our “Breakfast Morning” social events as chief washer up; a role he says he is made for! A cracking chap, here is his story. 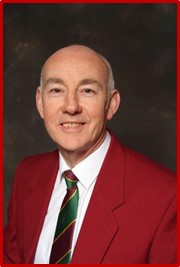 Birth, Education, Jobs, Family
I was born at home in Mansfield in February 1955 in a small terraced house off Littleworth, Mansfield. I am the eldest of three children and the only son. My late father worked as a Drayman at Mansfield Brewery for most of his working life and my late mother worked part time as a cinema usherette, cafe waitress and a cleaner at Mansfield Brewery. Neither of them learned to drive a motor vehicle so we never had a car but we managed to get around on the bus and train for days out and our childhood was happy.

I attended King Edward Infant and Junior schools and passed my 11 Plus. I gained a place at Queen Elizabeth’s School (then a boy’s grammar). I left school in 1972 and joined Barclays Bank, where I worked for 6 years. I left to join the National Coal Board (as it was then) to be a Time and Wages Clerk at Thoresby Colliery. I remained there for just over 15 years until the pit closure programme enabled me to take voluntary redundancy in 1993. I had met my wife to be Sue in 1983. We were married in March 1986 at St Mark’s Church, Mansfield and have two daughters, Sarah (born 1987) and Kate (born 1992). So when I left British Coal I was 38 years old and with a young family – I needed a job! I was taken on by the Benefits Agency as a Fraud Investigator just 3 weeks after leaving my job at Thoresby and I remained there for just over 2 and a half years. Then in 1996 I joined Nottinghamshire Police as a member of support staff, working in Crime Management and Force Intelligence for a total of 21 years, taking early retirement in 2017. I now have 2 grandchildren, Harry and Holly, aged 5 and 2 respectively and they keep me busy!

My eldest daughter Sarah studied Contemporary Lens Media (that’s photography to me) at Lincoln University and until the pandemic was a photographer at weddings and events. She now works for the Health Service. My youngest daughter Kate studied music at West Notts College Mansfield and Hull College and is now a teacher in Nottingham.

How did you get to join the Choir?
I have always had a love of music from a very early age when my cousins (who were all a few years older than me) were buying the latest records from the late 1950s and the 1960s and I loved to hear them on the old record player, as well as on the radio. My favourite band will always be The Beatles but I like many other artists such as Simon and Garfunkel, Bob Dylan, The Rolling Stones, The Who, Pink Floyd, Dire Straits etc. I could go on (and many people say I do). As I said previously, my daughter Kate studied music and plays the saxophone and piano. She was playing in a concert in 2010 at St Mark’s Church, Mansfield for the County Band who were appearing with the Mansfield and District Male Voice Choir. I had been a member of St Mark’s Church youth club and football team in my younger days. It was the first time that I had heard the Choir and I was very impressed with their sound. Sue urged me to try and join them and in 2011 I attended one of their rehearsals and the rest as they say is history. My only regret is that I didn’t do it sooner, and I mean that most sincerely folks (didn’t Hughie Green use to say that?).

What was your favourite appearance with the Choir?
Singing in the Choir has enabled me to sing in venues that I could never have dreamed of including The Manchester (Evening News) Arena, Derby Assembly Rooms, Albert Hall, Nottingham, Derby Cathedral and other much smaller places too numerous to mention. The one that would have to take top spot was our participation with over 800 male voices (mainly Welsh) at the Royal Albert Hall, London in 2018. When I thought of the great acts that had appeared on that stage before us, many of them hero’s of mine, I was filled with awe and pride to be representing my home town of Mansfield in front of so many friends and family. I wasn’t quite so chuffed when I realised that I had left my jacket undone for almost all of the first half of the concert and I was on the front row. I have the DVD to remind me too! I also enjoy singing at Queen Elizabeth’s Academy as it is now called, my former secondary school.

What keeps you going?
I look forward to our rehearsals at St Augustine’s Church, Abbott Road, Mansfield every Tuesday evening as it is like having an extended family but everyone is a friend. I was made to feel welcome from day one almost 10 years ago and being in the Choir is a classic example of the more you put in, the more you get out. I also like the way that the wives and family can become involved via the Ladies Support Group, who have helped to raise thousands of pounds through social events such as our breakfast mornings, which are held a few times a year and are always popular. They are a great opportunity to come along and meet some of the Choir members, have a breakfast and a chat and get to hear us sing a few songs. Don’t be shy, give it a try.

What do you like to do in your spare time?
I like to spend time with my family, looking after my two grandchildren, walking my two dogs, DIY, gardening, listening to all kinds of music, singing with The GentleMen, reading, playing a bit of guitar, trying to learn the piano and watching documentaries and dramas on TV. I am also an ardent follower of Manchester City FC and go to games when I can. We also have a static caravan in North Yorkshire so we go there as often as possible, and Sue and I enjoy our City Breaks, both abroad and in the UK.