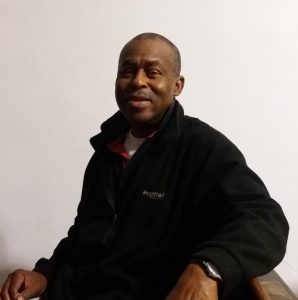 As anyone who has ever stood in front of him, at either rehearsal or in a concert, will know that Michael Joseph has a very rich and powerful baritone voice. Michael also has a deep love of music and considerable experience and knowledge of choral music having been involved with performance from his early childhood.

Michael is a family man with 4 grown-up children (who all seem to have inherited the musical gift) but 19 years ago Michael lost his wife, Grace.

“Performance in singing and theatre has kept me going all these years buttressed by my strong Christian faith. I would be nowhere without faith and belief”.

Michael explains that he originally joined the Mansfield & District Male Voice Choir back in 2008.

“I would be nowhere without faith and belief“

“I attended a children’s concert at my son’s school, Rampton Primary (Notts). The head teacher of the school at the time was Helen Chambers [daughter of Meryl Chambers, our former MD]. Meryl was at the concert and we got chatting. The choir were preparing for the Welsh National Choir Association massed choir event at the Royal Albert Hall in 2009 and she asked me to join.”

Michael’s music roots, however, go back much further; to the sunny Carribean and his birthplace of Trinidad & Tobago – a country steeped in musical traditions both of choral music and of the steelpans.

“My mother told me that I was singing when I was a baby. But my early memories were of singing at church when I was 3 or 4. I also remember very well singing in choirs at school both at Infants and at Primary School. I had a very high soprano voice as a boy. I can also remember pretending to conduct music on the radio as a child!”

“Mother had a big influence on me. She was a talented musician herself who received the second highest Grade 8 pianaforte exam score in Trinidad & Tobago second only to the famous Winifred Atwell.”

“My church choir did a lot of concerts especially Christmas cantatas and the material was very rich, difficult and challenging. When I was 15 our Choir sang a Christmas Cantata on Trinidad and Tobago television. I sang a lot of solos for the Choir and it was at this time I got my first experience of conducting a choir.”

At the age of 24 Michael joined the Marionettes’ Chorale, of Trinidad and Tobago, one of the oldest performing arts organisations in the Caribbean.

It was during his time with the Marionettes that Michael gained considerable experience in learning and performing complex and difficult choral pieces including the St Mathew Passion, The Magic Flute, Porgy and Bess and Carmina Burana. Michael has sung the Magnificat ( in an a capella version in Latin) and also Handel’s Messiah

“I have sung pieces in Spanish, French, Italian, Russian, Latin and German. My favourite language to sing in is Latin” explains Michael.

Michael also worked with some very highly-regarded musicians during this time.

The Marionettes, in their long and illustrious history, have toured the Caribbean, North and Central America and Great Britain and have won prizes at music festivals both in Trinidad & Tobago and internationally.

Michael took part in a number of overseas tours including in 1981 when the Choir sang at the Eisteddfod in Llangollen, Wales.

Michael also toured with the Marionettes to Ireland in 1984 to take part in the “Song and Dance Festival” in Cork, Ireland

In 1989 Michael emigrated to the UK but kept in touch with the Marionettes Chorale and was able to join with his old colleagues when they toured the UK again in 1992. The Marionettes sang in various venues in the country including St Martin’s in the Fields, London, York, Cambridge and Edinburgh and at the Commonwealth Institute, London.

On another occasion, in 1997 Michael joined up with the choir again, this time in New York and Washington as part of a tour of the United States.

Before he left the Carribbean, when Michael was 28, he completed a one year course in singing, dance, drama and theatre production at the Trinidad “Fame Academy” at the University of the West Indies

After completing the course Michael produced and directed a school production involving 200 children which was great success. Michael is especially proud of this achievement and inspiring originally some very unenthusiastic school children into producing such good work.

After emigrating Michael settled in London where he lived for 12 years. He continued to follow his passion for singing and was a member of the Ruislip Baptist Church in west London singing with an octet called “Celebration”. Michael moved with his family, to   Retford, Nottinghamshire in 1998  and sang with the Retford Operatic Society for a year.

As we’ve already heard a fateful meeting with a certain Meryl Chambers was to take place in Michael’s adopted hometown, where he still lives. Michael also sings with 2 other mixed choirs based in the local area, “The Village Harmony” and “Cantate”.

In terms of his professional career, Michael Joseph RN DipHE B Sc Hons qualified as a mental health nurse in 1993 at  Brunel University, London and has spent most of his professional career in forensic mental health nursing. He was a Team Leader in the West London Healthcare NHS Medical Secure Unit. He then moved to Rampton High Security Hospital ( North Notts) where he spent the rest of his career also as Team Leader.

At Rampton, Michael founded and facilitated a Patients Activity Group which enabled patients to express themselves in drama, discussion and presentation. These patients were from a variety of backgrounds and all with serious criminal convictions.

Michael has put himself forward to support Ian and Margaret as Assistant Musical Director of our choir. He is especially interested in teaching better breathing and performance  techniques to choristers.

“I think that the choir has the capacity to learn complex pieces and key to improving performance is better breath control. The mouth is just a passage way – power comes from the core” Michael explains.

We wish Michael all the very best in his new role with every confidence that he will bring his passion and  breadth of experience in helping us all achieve  our long term goal to improve as a choir.

3 thoughts on “I Love to Sing – Michael Joseph”