For anyone that doesn’t know me I am Terry Ashmore from the Baritone section and I joined the Choir in 2011.

I was born and schooled in Tibshelf, Derbyshire and had 2 elder brothers and a sister. My father was a collier and worked as a Main Gate Ripper at Glapwell pit, and later at Butcher Wood and Silverhill pits. He was a lean machine my dad, but he had wrists thicker than most people’s ankles! I guess it was the constant manual labour that did it! My mother worked for Barringer’s in Mansfield making Dudley military water bottles, but left to start a family after she married my Dad, I think she had her hands full with us to be fair.
As kids we were packed off to Sunday School every week and I suppose that was my first experience of singing as a group. I never really followed this up, but it never used to bother me when I was one of the few who could be heard singing out in school assembly.
I had a lovely, if sometimes chaotic childhood, and remember having a really poor attendance at school. In fact, I think that my favourite subject was Cross Country as I really enjoyed running, especially running away from school! I spent most of my time either biking all over Derbyshire or building tree dens and rope swings in the nearby Pilsley woods. I genuinely feel sorry for the youngsters today, as they have never experienced those simple pleasures, and a time when the roads were relatively safe to cycle on. However, in my final 2 years at school I did work hard and managed to achieve some decent grades to set me off on my working life. I was also proud, in my final year, to be Tibshelf School 1 mile champion!
After school I found employment with The Metal Box Company in Sutton in Ashfield as an apprentice engineer and attending West Notts College as part of my training. When qualified I moved through the different departments gaining skills and experience in manufacturing and tool room skills. I have also worked in Belgium, Spain, and France on projects for Metal Box. I currently work as a Maintenance Manager at the same facility.
I have a wide range of musical tastes and can listen to almost anything although I am not too keen on Rap. I used to love listening to the Top 40 in my teens and learning all of the lyrics to the hits, I particularly liked the Kinks and the Rolling Stones and used to do a decent Jagger impression at one time! I have done the usual Karaoke spots, but not on a regular basis, and was once asked to audition for lead singer in a band at college, but I was not keen as some of the members were a bit “ far-out” and so declined. I sometimes wonder what journey that may have taken me on, but I guess I will never know now.
Family life then came around and brought with it 2 girls and 3 boys, and two Grandchildren. Carlene and I will be celebrating our 25th Anniversary later this year,
In that time, they have all had to put up with my constant singing over the years, in the shower, bath, kitchen, lounge, well anywhere really. I just feel happy when I sing, even enjoying and feeling the emotion of sad songs. 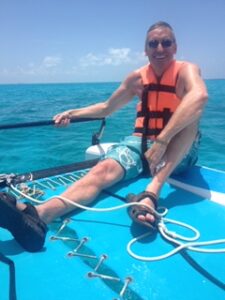 I was first made aware of the Mansfield and District Male Voice Choir when I was at a family occasion at St Philips Church in Mansfield. Al Roberts was in the pew behind me and he asked me if I had ever thought of joining a choir, to which I replied “ I can’t sing,” he invited me along to rehearsal saying “give it six weeks” and the rest, as they say, is history.
I personally think that 6 weeks is enough for you to judge if you are going to be able to sing in a choir or not. The discipline of sticking to your own part is critical to the success of the choir as a whole but you will soon know if you have the makings of a choir member. I must confess that learning the repertoire for the first year was difficult as I could not read music at all, but after a while and by asking others, I got to appreciate the timings and the meanings of the music as the composition demanded. I had often admired the close harmonies of the Motown groups but never really homed into the individual parts, and the realisation that each part had its own unique contribution to the whole was a bit of a revelation to me. Learning songs in Welsh, French, and German was made easier with the help of other members and the new technologies such as Muse Score now enables members to practise at home with a correct version of their part without the distractions from the other sections.
Within a year of joining the Choir I had the pleasure to sing at 10 Downing Street, had tea with the Chancellors family, and performed at the Manchester Arena with the Welsh association of Male Voice Choirs! I suppose my most memorable occasion apart from my first concert appearance with the Choir, was singing at The Royal Albert Hall in London with the Welsh Association, to perform in that iconic venue is a memory made with others that I will treasure. The whole weekend was fantastic and the camaraderie of the Choirs was humbling, and how the whole thing came together, from all of the separate rehearsals by Choirs from across the country, still amazes me!
I felt that I had well and truly progressed when I was asked to join the Gentlemen, who are all Choir members who enjoy singing different genres within and outside of choir concerts.
Recently it has been a difficult time for all of us with many leaving the Choir for different reasons and we have also mourned some dear friends who have passed from our ranks. The recent months have also taken a toll on people’s wellbeing, and I can think of no better way than singing as a group, however much depleted, to lift the soul. As it is often heard, it is the quality and not the quantity that counts, and hopefully the Choir can move into the Post covid future with growing and repeated confidence and success.
To sum up, I sing because it makes me happy to be with a group of people who enjoy making other people happy by their performances!