Mansfield & District Male Voice Choir has two Objects as part of its Constitution:

The Choir has, for many years now, supported and continues to support the work of charitable causes. Events Manager, Geoff Mansfield ( pictured below)  explains, 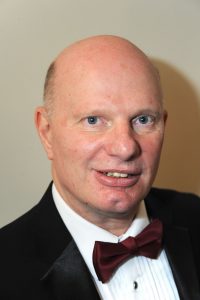 “We, as a registered charity ourselves, plan three concerts per year for raising and donating proceeds from the concerts. We choose recipients randomly unless we are either specifically approached or decide to support a particular charity.”

“Last year we supported The Stroke Association and this year Notts. Women’s Aid. We have helped to raise over £12,000 in the last three years from our own concerts and also our contribution to charity concerts organised by others.”

The forthcoming at QEA on 19 May 2017 (see Events page for details) is a joint concert with our guests from Holland, Amersfoorts Mannenkoor and is a charity event in support of Notts. Women’s Aid.

Nottinghamshire Women’s Aid are based in Worksop. It was founded in 1984 by a group of women who saw the need for a Refuge to escape domestic abuse in the area. Over time they have grown and now have 53 staff delivering services throughout the whole of North Nottinghamshire. The service is open to women, children and young people who are living with, escaping or recovering from domestic abuse and violence. They subcontract services for male survivors to its partner agency in Nottingham, Equation.

Jo Humphries is Intervention & Recovery Services Coordinator for the organisation. “We believe our service is an invaluable support to women, children and young people who experience a very serious, often invisible and hidden abuse,” said Jo.

Jo and the team are very busy in preparation for the concert,

“We also have a number of our staff committed to baking for the tea and refreshments and are running a competition for a £25 John Lewis voucher for the worker who sells the most tickets.”

Coming to one of our concerts is a way to appreciate some lovely choral music and also an opportunity to meet some lovely people and to support a really good cause.

The last word goes to Geoff Mansfield, “We are obviously a men’s choir and this concert is in support of those who have suffered and been abused by their menfolk. It’s a good thing for us to do.”

The music will be great ( as always!), the hospitality will be fantastic and the feeling from supporting such a great charity will be priceless. Hope to see you there!