Members of the public, museum staff and choristers old and new joined Choir President Mr David Marriott and Mansfield’s Executive Mayor Tony Eggigton at the official opening of a fabulous exhibition of the history and future of the Mansfield and District Male Voice Choir at Mansfield Museum on the glorious Saturday 21st June.

The exhibition was put together by a small team from the choir led by the Chairman Geoff Mansfield and Secretary Eileen Lawrence and it tells of the choir history and contribution to the life of the area dating back to 1926.

David Marriott opened up proceedings by gathering the choir and guests to the exhibition area and introducing the Mayor. 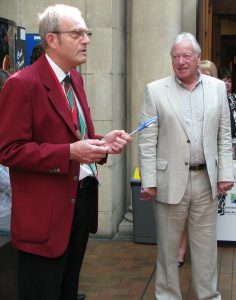 Choir President David Marriott about to hand the scissors to

As he cut the ribbon, Mayor Eggington reminded everyone of the choir’s distinguished 70 year history saying that the choir is a major ambassador for the town, successfully representing the area over many years. 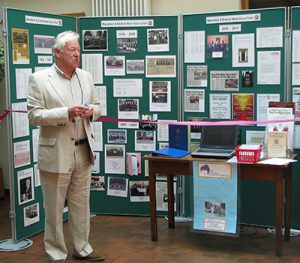 My Lord What a Morning, The Rose, and Yesterday. The final piece, Mansions of the Lord, commemorating all those who have died in warfare was directed by Ian Grice.

Margaret Ball accompanied all the pieces on the piano. 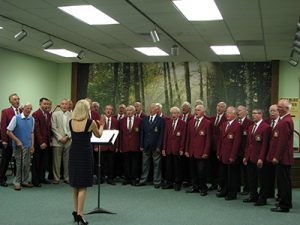 A celebratory cake was cut by both Meryl and Tony and the event was rounded off by announcing that the choir aims to join the Mansfield Sister Cities Association in Pittsburgh, Pennsylvania in September 2016 as part of the choir’s 90th year celebrations.

The exhibition in the Museum runs until 4th July 2014.