The choir was recently contacted by a sister and brother living in Australia; isn’t it amazing the reach a website affords!
Ann Booth lives in Queensland, just off the Great Barrier Reef and David Brelsford resides on the island of Tasmania but their roots back to Mansfield run very deeply in their consciences. Why? I hear you ask.
They wrote to tell us about the passing, at the age of 107, of their father Ron, formally known as George Ronald (Ron) Brelsford. Ron Brelsford was a member of Mansfield and District Male Voice Choir for many years from approximately 1930 until he emigrated to Australia in 1970.
This choir photograph, from 1949, shows Ron, a 2nd Tenor, second from the left on the back row.

Ann and David clearly recall the choir performing in the 1956 Llangollen Eisteddfod and still treasure photographs of the choir and then conductor, the illustrious Harry Smith. Apparently, dad told David that, when the choir won their section and beat Treorchy MVC, a famous WELSH choir, they were quietly advised to ‘get out of town quick.’!!

Ron emigrated in 1970 and up to the age of 105 he was living on the Central Coast of NSW where he was a member of the biggest Seniors Centre in Australia. He was an active member of their Variety Group, writing and singing songs for them and reciting the many poems he had learned as a boy and never forgot. He sang with his local choir up until about three years ago when his eyesight got too bad for him to follow the music. Ron lived in Tasmania with David for about 3 years and fortunately, his mind was very sharp right until the end; but alas, his body had obviously had enough and he passed away on Monday 7th June. His funeral was held on Tuesday 15th June, in Tasmania and one of the songs played was “What Would I Do Without My Music”. This fabulous song is still in the repertoire of M&DMVC today, a great choice! 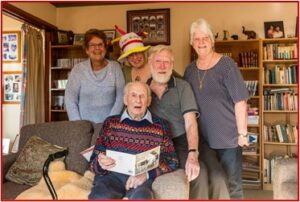 A more recent photograph from the Launceston Examiner newspaper portrays Ron and his family at the celebration of his 107th birthday, the oldest person in Tasmania and the 6th oldest man in Australia, of which Ron was quite rightly immensely proud. His recipe for a long life was “having a sharp wit, clean living and a love of song!
As a choir we are proud to be associated, through song, with the long-life of Mr. Brelsford and are grateful to both Ann and David for keeping in touch.

1 thought on “Ron Brelsford – News from across the world!”