Once again 2021 has seen the passing of another of our chorister family, Mr Brian Lister. Brian was a member of our second tenor section for about 10 years. He had wide experience of singing and had a fantastic vocal range being able to sing all four parts with little effort. A quiet man with hidden strengths and experience he will be missed for this ability and measured and pragmatic approach to life.

Brian originally hailed from Cumbria having been born in Carlisle in 1936. He attended a boarding school at St. Bees on the Cumbrian coast before achieving the rank of Second Lieutenant in the Royal Artillery. He taught Physical Education and was a keen skier and rugby player.
Brian began work for John Laing the international construction company when the company was a small local business. His career grew with the company leading Brain into managing major construction projects such as cathedrals, distilleries and hospitals which required him to travel a lot and live in on site caravans. He and his wife Rae and their three children Andrew, David and Katherine lived in Northern Ireland and Biggar in Scotland before settling back in Dalston in Cumbria. Whilst in Ireland Brian continued to be a keen rugby player playing for Carrickfergus. In the last ten years of his working life, he was a college lecturer and Carlisle Technical College passing on his building and management skills to the following generation.
Brain was a church warden at Dalston St Michael’s church and a member of Dalston Male Voice Choir. 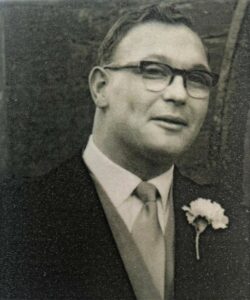 When Rae passed away Brian eventually booked a Saga singles holiday on which he met Anne Hough. Anne and Brian became very good friends travelling together across the world and Brian subsequently moved to Edwinstowe. His love of male voice singing led him to Mansfield and District Male Voice Choir where he made a solid and reliable contribution to the sound of the choir and joined in with our adventures and shared experiences.

We salute you Brian for a well lived life and are reminded of you when we sing your favourite piece; You Raise Me Up.

1 thought on “The Life of Brian”