My colleague’s was, he conceded, only a personal view and he certainly wasn’t suggesting that this was a general opinion amongst his or any other male voice choir. Individual opinions are, as much as anything else, the spice of life. 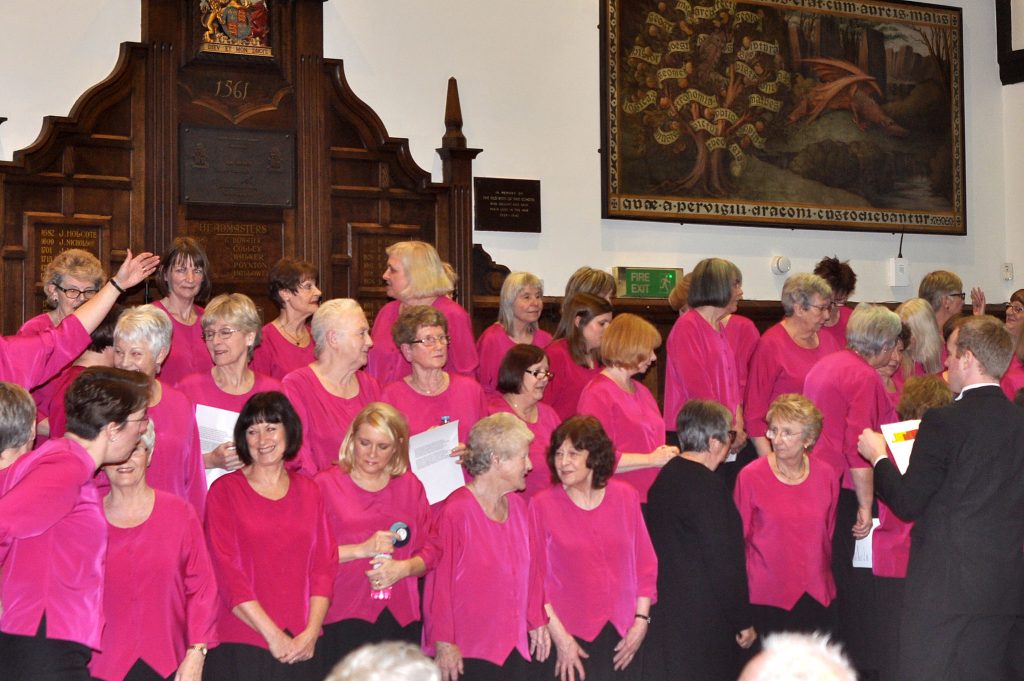 There was a lot of variety in “Leap Into Spring. Alex Patterson made a point in his presentations how the Radcliffe Ladies like to bring it into their programmes. So it was nice to have some comedy by way of the old Monty Python classic The Song That Goes Like This.  Laughter, so they say, pre-dates language as a means of communication between humans. I’m not sure how “they” know about these things but comedy and language; still core to our experience and still going strong after all these years!

The poignancy in the set for me, and we’re back to personal opinions again, was the Ladies’ choice of Dream a Little Dream of Me. I know that that song has been performed by numerous singers over the years but I will always think of Mama Cass Elliot when I hear that song. She was a great singer, with a voice that could really touch your heart and she had such a tragic ending.

By popular consent, however, the highlight of the evening was the joint item at the end of the show Speed Your Journey, one of the great choral pieces.  A good friend of mine came to see us at this show for the first time and commented on the professionalism of the performance. I hope he was also uplifted and inspired to hear that wonderful performance of male and female voices complementing each other in such a wonderful expression of hope and longing.

Ladies, we enjoyed making music with you and we wish you all the best on your forthcoming tour.

Anyway, back to variety, “Waves of Sound” was, as they say in Mansfield, “diffrent aggen”. This concert was in support of Alzheimer’s Research UK; the Choir waived its fee for the event and the concert was able to raise over £650 in support of the charity. It is so appropriate to support this particular charity as evidence is showing that singing in group music sessions significantly improves the cognitive abilities of moderate to severe dementia sufferers.

We are very pleased to have a number of young guys in our Choir and we’re also pleased to have the opportunity, from time to time, to showcase their individual talents. Congratulations are due to Josh Reynolds, Jonno Lee and to Dan Hayes for their performances on the evening and to Meryl for her help in supporting these new talents.

On the evening we also had The Gentlemen, we had Meryl and Margaret playing a piano duet and we had a couple of poetry pieces  performed by Howard  Lawrence and Harold Huxtable. Plenty of variety and quite a bit of spice I’m sure you’ll agree!

Special thanks to Howard and Eileen Lawrence and Geoff Mansfield for organising the event (  also to Sheila Brumfitt for “Leap Into Spring”) and to everyone who made a contribution; enabling us to share this music and bring some spice  to our communities.