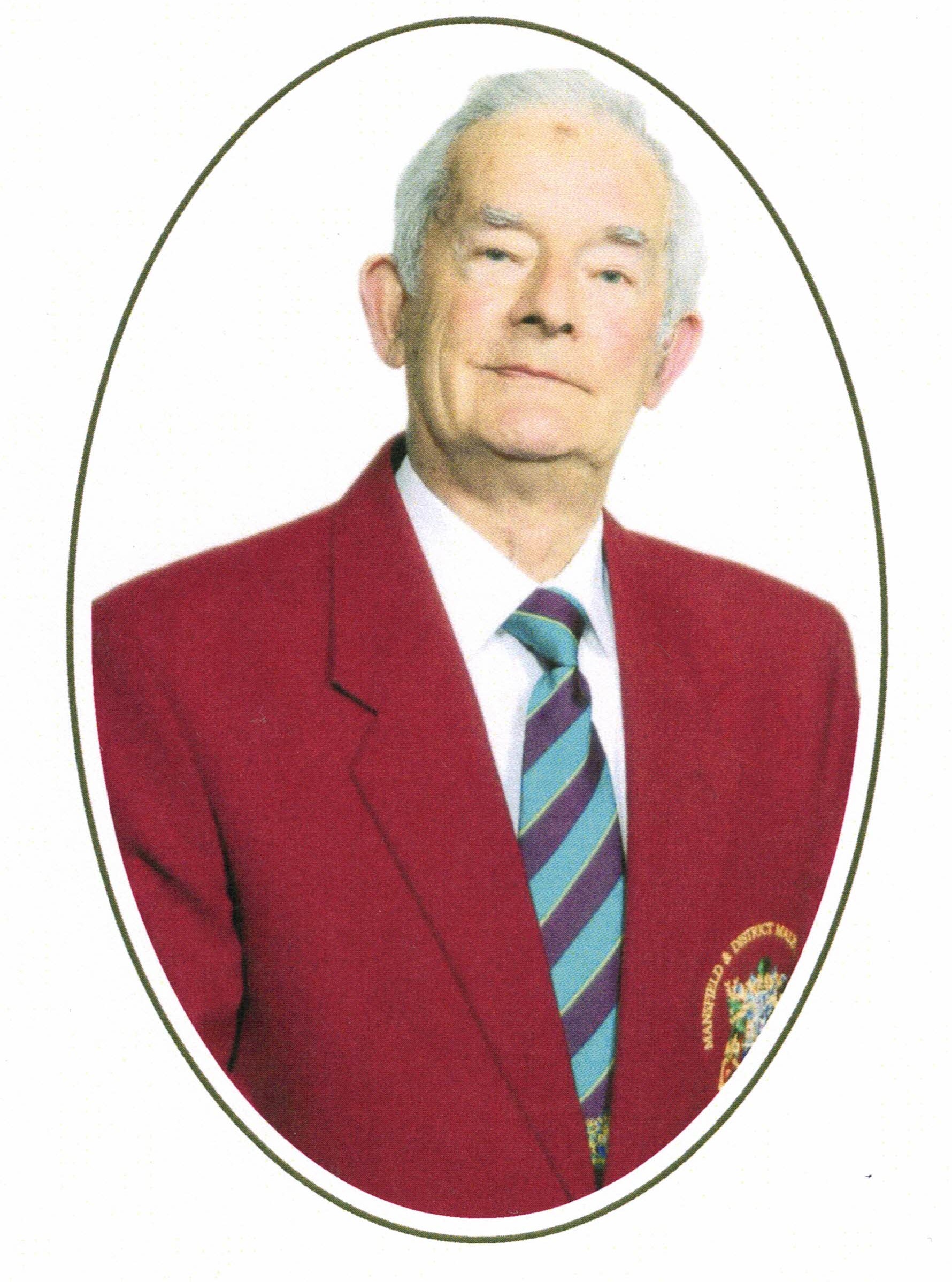 Today, at Harbour View Crematorium, Lytchett Minster near Poole, a service of Thanksgiving and Celebration was held for the life of Walter Ernest Pitchford our friend, leader and mentor. The choir was represented by MD Ian Grice, Chairman John Wakeland and Concert Manager, Lynden Lowe, a long-standing friend who knew Walter for 53 years. Yvonne, Walter’s wife, sadly, was unable to attend due to illness after suffering a massive stroke in April 2021 which resulted in Nicholas, their son and his partner Howard, relocating Walter and Yvonne from their house in Sutton in Ashfield where they had lived for 68 years. Their daughter Michelle and her husband Mark had flown in from South Africa to attend the dignified service provided by the crematorium.

Walter was born in Sutton in Ashfield in 1930 and grew up with siblings Jess, Ken, Clifford and Mary. At the age of two Walter contracted tuberculosis and spent ten years in hospital. Once recovered from the condition he unfortunately slipped on the hospital floor, damaged his hip, and spent a further three years being treated by hospital staff. During his stay the Duchess of Portland made a visit and Walter was selected to present her with a bouquet which he would only do if the Duchess brought him a football. His indomitable spirit was clearly in evidence at this young age and ambition and determination were a lifelong feature of his character.

Walter started work at 15 as a trainee lacemaker and went on to become a precision engineer and toolmaker. Yvonne and Walter met at wedding and became married themselves at St. Mary’s Sutton in Ashfield in 1955. Walter was a keen singer and was a member of our choir for 53 years and recalled with fondness many festivals, competitions, concerts, solo performances and differing musical directors and accompanists. Walter really cared about the choir and served on the choir’s committee on multiple occasions and in multiple roles including Secretary and Chairman. He always had the gift of making connections with people not only in our choir but with choirs across the country. His most treasured memories were singing the Royal Albert Hall with over 1,000 voices with the Welsh Association of Male Choir and also at 10 Downing Street.

Walter had other interests, particularly sport and was involved in clubs for football, darts and bowls; indeed, he became a bowls umpire and coach, organised bowls for the blind society, became a Notts. County Bowls Coach and was awarded Nottinghamshire coach of the year.
It is without doubt Mansfield and District Male Voice Choir has been shaped by Walter’s influence and management. He witnessed the glory days of competition dominance, fantastic concerts in the Mansfield area and further afield in many locations across the U.K. and in Germany through Mansfield’s links with Heiligenhaus. Walter always seemed to be at the centre of progress within the choir and has nurtured and encouraged many choristers to a lifelong love of male voice choir singing. The Facebook postings following his passing on 14th April 2022 and prior to his funeral today reflect the love and respect in which he was / is held.

The choir tribute was to send a recording of two of Walter’s favourite songs Morte Criste and The Rose both of which were played during the service. Rest in Peace Walter.

Yesterday we were told upsetting news regarding the passing of one of Mansfield’s stalwart singers. Walter Pitchford was a member for over 50 years until retirement in 2018. He was a brilliant first tenor, soloist too, then later changed to the baritones .He was chairman for many a year and got us singing in some remarkable places .With myself he was party to our joining of the Welsh Association of Male Choirs .He arranged weekends and even a 10 day tour, all done with remarkable precision .This is one man we are all going to miss being around, very loving and loveable in every way. Mansfield & DMVC was in his bloodstream, not one or two days a week but every day. We are receiving messages from far and wide Phil Lloyd from Pembroke and District MVC, John Bailey Kilcoyne and Alwyn Humphreys to mention just a few .Please leave any thoughts and wishes below then Michelle Pitchford and Nicolas will see them .Thank you with a heavy heart. RIP my great friend Walter. Ian Grice, MD, Mansfield and District Male Voice Choir.

Walter did a lot for the choir and also other choirs in fostering friendships far and wide, never heard hm say he wouldn’t help another choir. R.I.P. Walter it was an honour to have known you. Lynden Lowe, Concert Manager M&DMVC

R.I.P. Walter, it was a pleasure to have known you. strong>John Wakeland, Chairman M&DMVC

Wonderful memories of Walter from my happy times with the choir in the 70s and 80s. Walter was the personification of what amateur male voice choirs are about. Commiserations and best wishes to all at Mansfield and District Male Voice Choir. Rick Morrish, Former Chairman Carlton Male Voice Choir

So sad to hear of Walter’s passing. When I came to live in Mansfield, I went along to sing with the male voice choir and was made to feel very welcome by Walter, the then Chairman. Years later I was accompanist then MD with the choir. I always looked upon Walter as a true friend and as a colleague I could always lean upon him for advice. He was a true stalwart of the choir and everyone who knew him will be saddened by his loss. Thoughts go out to his family and friends. R.I.P. Walter. Roger Holland, Accompanist Carlton Male Voice Choir

I first met Walter when we sang together in The Mansfield Choral Society during the 1980s. He was Chair of the MDMVC when I joined it and I recall his very warm welcome on my first rehearsal night which was very much appreciated. I remember his sense of humour and absolute commitment to the choir.
Phil Robinson, M&DMVC

Walter was friendly with everyone. It was his encouragement as a new chorister that kindled by love of male voice choir singing and of Mansfield & DMVC in particular. Walter served in just about every role on the choir committee, extended the choir’s reach and friendships around the country, sang solos in a wonderful Baritone (and formerly as a tenor) voice and inspired warmth in our audiences and imbued the choir with an all embracing, welcoming camaraderie. His wife Yvonne was endlessly supportive of his life’s passions his family and our choir. We are indebted and lucky to have shared time with him.
Geoff Mansfield, M&DMVC

So sorry to hear about Walter’s passing. He was a great and true friend. John Denys Whelpton, M&DMVC

Sorry to hear about the loss of a great guy, our wishes go out to his family. The were great friends to our mum and dad. Regards from the Hales family

Always had time to talk things through. one never realises until too late how big a part people play in your lives. Take care Walt’s family. – Mario Curtis, M&DMVC

Very sorry to hear about Walter. He was the one who persuaded me to join the choir many years ago. Les Ambler, M&DMVC

Condolences from all at Carlton MVC. Danny Horan

So sorry to hear this news. He wi8ll be missed, our condolences to his family. Bestwood Male Voice Choir

I didn’t know him, but he is well spoken about so RIP Walter and be singing in heaven. Peter Baugh, M&DMVC

Thank you to each & every one of you for your lovely words & memories of my Dad, Walter. He will be sorely and truly missed.
Michelle Pitchford